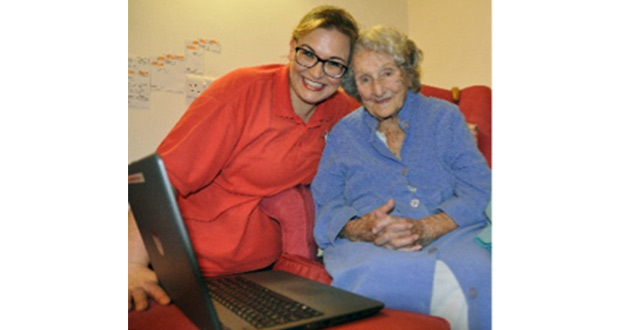 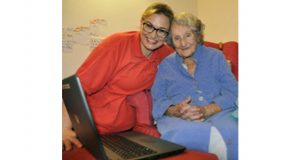 Terry Hayward, a resident at Colten Care’s Newstone House in Sturminster Newton, has always wanted to discover more about her roots.

Now, thanks to carer Rebekah Goddard the former infant school headteacher can trace her family back to Tudor times.

Terry was born and brought up in Preston, Lancashire and has travelled the world, visiting Australia, Canada and much of Europe.

She never married or had children and prior to moving to Newstone House in 2015 she spent many hours searching church records and visiting different towns to find evidence of her family’s existence. But she could only trace back “so far”.

But with the help of Colten Companion Rebekah Goddard she has made some eye-opening discoveries about her heritage, including finding a relative who lived in Corfe village when the order was given by Parliament to destroy the castle.

Terry said: “Apparently my ancestor Augustin Nineham (1630-1669) lived in the village in 1646 at the time of the siege and eventual destruction of Corfe Castle. Who knows, he may even have seen it happen. I was astounded.”

But Rebekah was able to go even further back, finding a John Inam Nineham who was born in 1523, married someone called Alice and lived in Worth Matravers until he died in 1578.

Terry said: “I would love to find out more about John. Perhaps he and I still have relatives living in this area?”

Rebekah said: “When Terry and I sat down at the computer together six months ago, we never dreamed we would uncover so much.

“It was painstaking but very interesting and every time we found a little more information I was aware I was helping to make one of this lovely lady’s longest held wishes come true.”

Rebekah also discovered that each of Terry’s paternal aunts and uncles were born in a different location in Dorset, as her grandparents were agricultural labourers who travelled about according to where the work was.

The biggest shock however was yet to come:

“Every St George’s Day my sister and I celebrated by wearing roses,” said Terry. So when Rebekah found we were actually from Irish stock I was absolutely speechless.

“I suppose I will now have to start wearing a shamrock on St Patrick’s Day!”