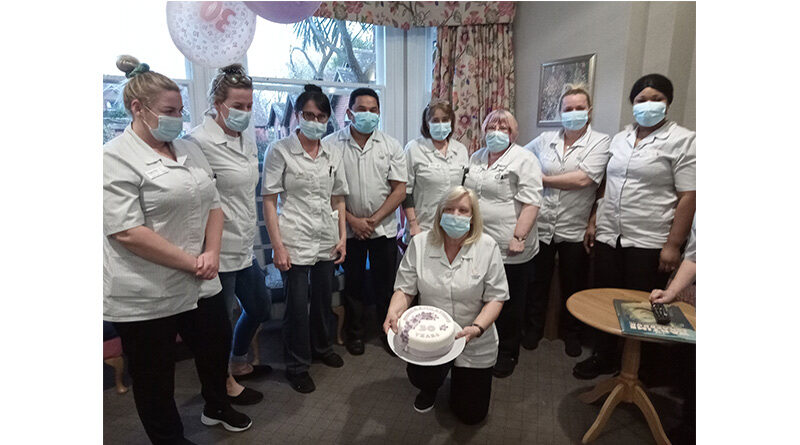 A dedicated healthcare assistant has notched up a remarkable 30 years’ service at the same Lymington care home, including eleven years working on night shifts.

When ex-hairdresser Heather Annear joined Colten Care’s Court Lodge in the spring of 1991, she had no idea how long she would stay.

“I never imagined I would still be working here 30 years later,” said the 62-year-old grandmother. “A friend suggested I apply but at one o’clock in the morning on my first night shift I remember asking myself, ‘What are you doing here? You should be at home tucked up in bed’.”

As it turned out, working three nights a week was convenient for Heather. It meant she could spend more of the daytime with her son Matthew, three, and daughter Laura, six.

Husband Roger would leave for his job as a panel beater and sprayer in the morning just after Heather got home from her shift.

“It was an ideal arrangement when the children were small,” she explained. “It was easier than me working during the day. Regular night shifts do affect your body clock but if you can have a rest day and avoid too many shifts in a row you can get used to it.”

Heather spent her first five years at Court Lodge working nights on a 24-hours-a-week contract. She then switched to day shifts as the children got older, maintaining that arrangement for the next 19 years.

Six years ago, she returned to nights so she could help look after her two grandchildren, Laura’s son Elliott and daughter Esme, at convenient times during the day.

Heather, who was born and bred in Lymington, says she has enjoyed great camaraderie with colleagues over the years, adding: “Court Lodge is a family-orientated place. Staff tend to stay a long time and everyone looks after one another. The night staff are a tight bunch. You spend 12 hours together on a shift and become like a family. You’re always there for each other, happy to swap shifts and provide holiday cover.”

In spring 1991, the Channel Tunnel was still under construction, scientist Tim Berners-Lee had just launched the first web browser, rock star Freddie Mercury was still alive and the Gulf War had just ended.

Asked if the role of healthcare assistant had changed over the 30 years since then, Heather said: “Technology and training have improved. For example, when I started we had a pump-activated mechanical hoist to lift people but you still needed two staff to use it. You just had to build up your muscles. Now, there is more advanced equipment for everything and you are better trained for moving and handling, so it’s less physically demanding. However, the focus of the job remains the same. It’s all about caring for our residents and making sure their needs always come first.”

Colleagues from both day and night shifts marked Heather’s 30-year anniversary with a surprise celebration.

Court Lodge Home Manager Rebecca Hannam said: “We told her there was an all-hands staff meeting in the lounge but when she walked in we met her with a party. There was a beautiful cake made by our chef Hannah Clark, glasses of bubbly, flowers and cards. It was a great opportunity to recognise Heather’s enormous contribution to the home and reminisce about years gone by.”

Heather said: “The fact everyone made the effort to come in and get together as a surprise was so lovely. It really means a lot to me. It shows you are appreciated.”

Heather has no plans to retire and her advice to anyone thinking of a career in care is to go for it.

“I love working at Court Lodge,” she said. “You can help people so much by making life more comfortable for them. They rely on you so much, you become a friend as well as a carer.”