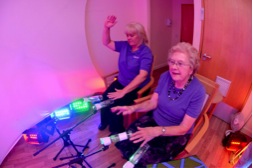 Care UK has teamed up with performance charity Eye Music Trust to bring therapeutic workshops using colour, light and music to more of its care homes in Greater London.

The partnership should enable Eye Music Trust to raise funding from the Arts Council and the Baring Foundation to develop and widen its work, which includes workshops for older people living with dementia as well as younger people with learning disabilities.

The link up comes about after the charity ran very successful week-long workshops at Care UK’s Heavers Court in Croydon, Woodland Hall in Stanmore, Whitefarm Lodge in Twickenham and Charlotte House care homes in Isleworth.

The workshops involve the Eye Music Trust team setting up an installation including fabric screens, LED lights, computers and movement sensors. They then run highly interactive sessions of 40-60 minutes for groups of residents, who use the sensors to control colour and light and to play music. The culmination of the week’s work is a concert, put on by the session participants for other residents, as well as family and friends.

Feedback from Care UK colleagues involved in the workshops has been extremely positive. Sheila Peterson, activities coordinator at Heavers Court in Croydon, said: “The participants seemed to really enjoy making music as a group, rather than just listening to it.”

“The workshops had a very visible and positive effect,” said Nirmala Juggapah, home manager at Woodland Hall in Stanmore. “Participants had real pleasure in their faces and the music brought them out of themselves. Overall, it created a wonderful atmosphere in the home.”

At Whitefarm Lodge in Twickenham some 60 residents took part in twice daily workshops over the course of a week. Shane Cosgrove, manager of the home, said: “Residents really enjoyed the experience of controlling the music and light and those living with dementia responded well. The workshops are very interactive but designed for all levels of ability. Most importantly, they’re fun.”

Additional sessions are planned for three more Care UK homes – Franklin House and The Burroughs in West Drayton and Whitby Dene in Eastcote.

Commenting on the continuing partnership with Eye Music Trust, Andrew Knight, Care UK’s managing director of Residential Care Services, said: “We believe passionately in the positive and therapeutic role that the arts can play in the lives of older people who are living with dementia. We’re therefore very pleased to be able to support Eye Music Trust in its exciting work and look forward to hearing plenty of positive stories from the forthcoming workshops in our Middlesex homes.”