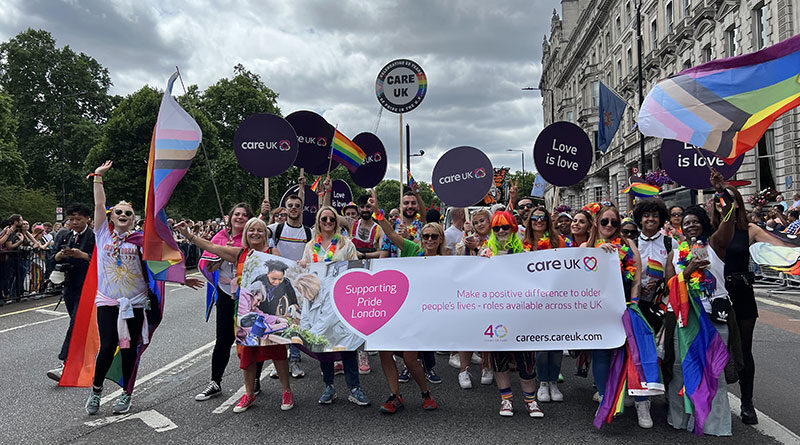 50 Care UK team members from 19 different care homes paraded through the streets of London to show their support for London Pride and underline the care home provider’s commitment to equality and diversity.

Team members from Care UK’s central support teams, based in Colchester, as well as those from several Care UK homes including, Asterbury Place care home in Ipswich, Dashwood Manor in Basingstoke, Bickerton House in Bracknell, Queen’s Court in Windsor, Amberley Lodge in Purley, Millers Grange in Witney and Davers Court in Bury St Edmunds, took part in the parade to show their support for the LGBT+ community.

This was the third time that Care UK has taken part in the London Pride parade. When the team first took part in the parade in 2018, Care UK launched its official LGBT+ Network, which continues to provide training and guidance to Care UK team members on LGBT+ related issues, as well as developing an open culture in every care home.

This year was a significant year for the Pride movement and the LGBT+ community as they were commemorating 50 Years since the first Pride took place in the United Kingdom.

It is also a significant year for Care UK, as its care homes across the country will celebrate the organisation’s 40th anniversary in September.

Eileen Coyle-Jones, regional director for Care UK’s West London homes, said: “The two main values that we share with London Pride are equality and diversity. Care UK is delighted to have taken part in the event since we are dedicated to promoting equality of opportunity for all, including employees, job applicants, residents, and visitors. The fact that so many of our Care UK colleagues participated in the parade is thrilling.”

Dil Perera, Home Manager at Dashwood Manor, added: “London Pride always brings people together in a very special way, so it was fantastic to be a part of the celebrations and show our support.

“This was Dashwood Manor’s first time at the special event, and it was a wonderful day for everyone involved. We are already planning for next year!”