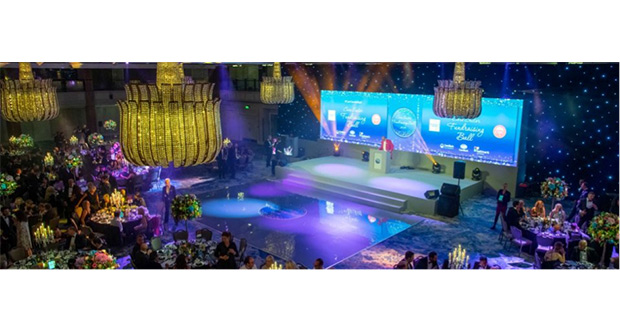 The second annual Care Sector Fundraising Ball has raised a staggering £200,000 for the Alzheimer’s Society and The Care Workers Charity.

More than 500 people, attended the glittering fundraising event at the Grosvenor House Hotel in Mayfair on Saturday 28th September.

The headline supporters, alongside Hallmark, for the second-year running were CareTech and the CareTech Foundation with key support from Lawrence Baker, Welltower, Precious Homes, Athena Care, Morgan LaRoche and ihl uk.

The special event hosted by MC and the original Stig from Top Gear, Perry McCarthy, featured a silent and live auction with many prizes and pledges donated by the care sector.

Throughout the evening, guests also enjoyed a gastronomic four-course feast of Indian food, with hilarious entertainment from celebrity auctioneer Jonny Gould and comedian Kev Orkian, as well as stunning performances from Glam Slam, who performed songs from Motown, and brilliant dance act FroBacks.

Speakers at the event included Founder of the Care Sector Ball and Chair of Care England and Hallmark Care Homes Avnish Goyal, Chief Executive at the Alzheimer’s Society Jeremy Hughes and CEO of The Care Workers Charity Richard Muncaster who spoke about the critical work they do and the impact these charities have had.

Avnish Goyal said: “As well as raising such a significant amount of money, the event achieved its goal of raising awareness of the essential work of the Alzheimer’s Society and The Care Workers Charity. I believe that it is also going some way towards uniting all parts of the sector, including operators, suppliers, as well trade associations, most of which were represented on the night. It is very exciting to see how many people are already asking to be involved next year.”

CEO of CareTech Foundation, Jonathan Freeman said: “We at the CareTech Foundation were delighted to be able to support the Care Sector Fundraising Ball. Our charity is committed to delivering meaningful impact to communities in the UK and overseas by supporting and championing the social care sector, care workers and those living in care. The Care Sector Ball was a fantastic opportunity for us to celebrate the vital contribution care workers make to society.”

Chief Executive at the Alzheimer’s Society Jeremy Hughes said: “I’m delighted that Alzheimer’s Society were a beneficiary charity partner of the Care Sector Fundraising Ball. It was an honour to be involved and to have the opportunity to meet with leaders in the care sector who are similarly committed to supporting people living with dementia.

“Without support, we would be unable to help individuals and families affected by dementia today and find a cure in the future. I’d like to personally thank you all for uniting with us by attending the Care Sector Fundraising Ball.”

CEO of The Care Workers Charity, Richard Muncaster said: “The Care Sector Ball raises much needed funds for The Care Workers Charity enabling us to support many more care workers in crisis, but it is more than just that – it’s also an opportunity for the whole care sector to come together to recognise and value the immense contribution that care workers make to our society.”