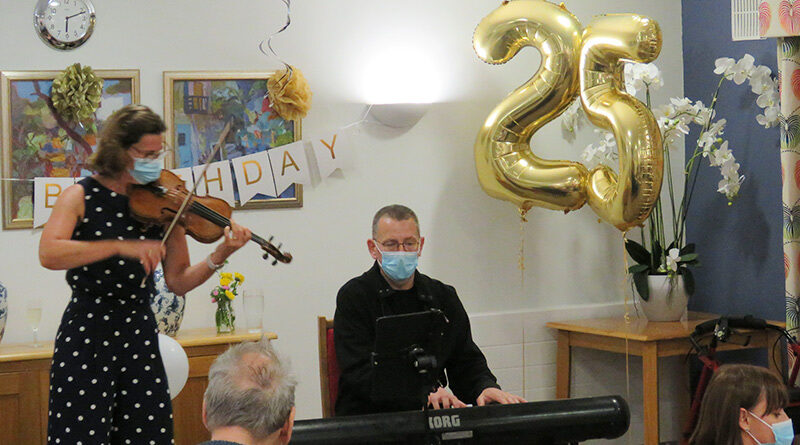 A quarter century of community care has been celebrated in style at a Bournemouth residential and nursing home.

Over canapes and bubbly, they were treated to an evening of music in the dining room by two visiting performers from Bournemouth Symphony Orchestra.

Violinist Jennifer Curiel and horn player and pianist Kevin Pritchard played a selection of popular pieces, much to the delight of the audience.

Resident David Small said: “The music was beautiful. It felt as though we were at the theatre, not in our dining room.”

When Avon Cliff opened in the autumn of 1997, Tony Blair was still in his first year as Prime Minister and Bill Clinton was in his fourth as US President.

It was also the year that saw the deaths of Diana, Princess of Wales and Mother Teresa, while popular British films included The Full Monty and the Spice Girls’ movie Spice World.

Home Manager Theresa Sales said: “Over the years Avon Cliff has been home to many residents and their families and a happy place for staff to work in.

“It was a joy to invite our residents, their families and members of the local community to join us for our celebration. Everyone thoroughly enjoyed the evening.”

The home’s Clinical Lead Emma Williams, recently appointed after a decade of nursing in the NHS.

Reflecting on her move to Avon Cliff from the NHS, Emma said: “I didn’t know the home that well but I had always thought of Colten Care with fond memories. I knew it was a nice environment to work in. They have that reputation. When I started to look for another job it was the only place I looked at. I am enjoying the role as it’s very different to what I have done before.”