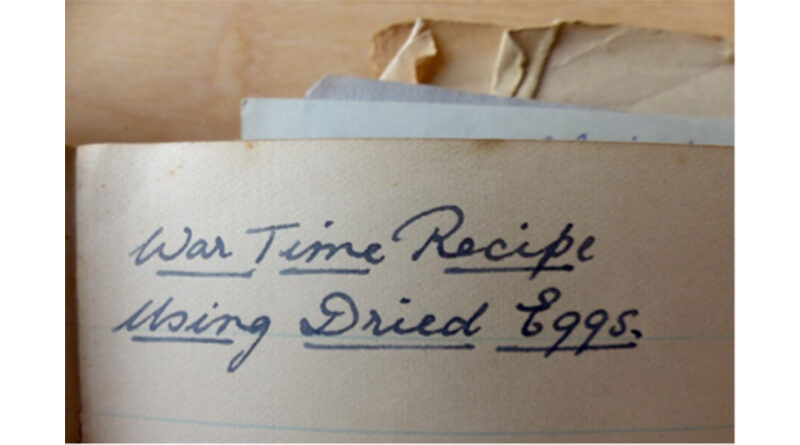 Residents at a Hampshire dementia care home have rekindled personal memories of life during wartime to contribute ideas for a forthcoming community cookbook.

Colten Care’s Linden House in Lymington responded to a request for handwritten recipe suggestions to interest younger people and families stuck for culinary inspiration during lockdown.

An initiative of the Sway-based arts charity spudWORKS, the book aims to connect generations by sharing thoughts about what it is like to cook in times of uncertainty.

One of the Linden recipes, contributed by a resident called Helen, is for chicken soup with dumplings known as kreplach, a favourite in Jewish households around the world.

Helen said: “We often referred to chicken soup as ‘Jewish penicillin’. If ever you were feeling unwell you could always be assured that after a bowl of soup you would feel much better.

“On my wedding day I was given a present of a cookbook written by the Jewish food writer Florence Greenberg which included the soup and kreplach recipe. I passed it onto my son to enable him to continue our Jewish traditions.”

Another Linden recipe, from a resident called Pat, is for a ‘wartime Christmas fruit cake’ complete with cold strained tea, a slug of brandy or rum, and warmed black treacle.

Pat said: “Christmas was always an especially exciting and magical time and I remember my mother swapping and pooling ingredients so that the cake could be made. I loved standing beside her, stirring the mix, adding sixpences, making a wish and, of course, as all children love to do, scraping out the bowl and giving my approval.”

Jonathan Oldfield, spudWORKS ‘Artist Out Of Residence’, said he was already sharing the recipes from Linden House even before the book is finished.

He said: “We want to pass on recipe ideas from older people in the community that may be taken up by younger generations, for example families with young children, during this strange and socially distanced time.

“The idea has already generated a great deal of interest and we hope the book will become a culinary ‘time capsule’ of Sway and the New Forest during the pandemic.

“It was inspired by a leather-bound collection of recipes I have at home that originally belonged to my great grandmother Gladys Mabel Beard.

“I’ve chosen the title ‘Using Dried Eggs: The Lockdown Cookbook’, as she had scribbled ‘using dried eggs’ in a note accompanying a recipe in August 1942, just as wartime rationing was forcing her to alter how she approached cooking.

“Now, in 2020, we are once again a country with so many people kept indoors and having to rethink how we shop, cook and live.”

Once finished later this autumn, the cookbook will be kept at spudWORKS for display to the community.