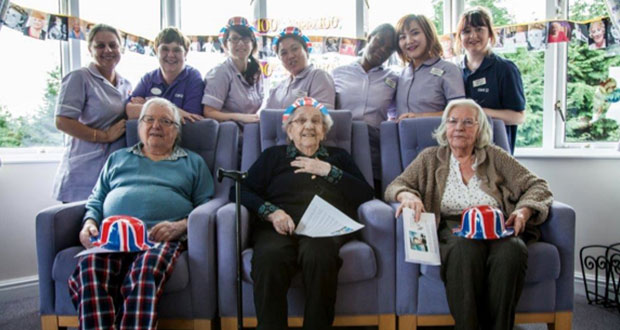 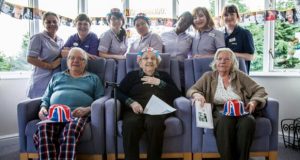 As well as signing along to the iconic wartime song “We’ll Meet Again”, residents recorded a birthday greeting and shared their memories of how Dame Vera’s music lifted the nation’s spirits during the tough wartime years. A copy of the film was posted to Dame Vera and residents are hoping that she will enjoy being reminded of just how special her music was to so many people.

Marion Brigson, a resident at Priors House in Leamington Spa was one of the people who shared her memories on the film – she spoke emotionally about how she remembers listening to Dame Vera’s singing while sheltering from bombing raids and how the music used to ‘light them up’ during those dark days.

To her surprise, Marion was even featured on the national BBC news programme Newsnight when their reporter came to the home to interview residents about their memories of Dame Vera Lynn. As the closing credits of the news programme rolled, viewers were treated to interviews with residents and shots of the Priors House team in in period costumes including army uniform and 1940’s frocks, residents enjoying a singalong and wartime refreshments including spam and jam and sugar sandwiches.

One resident who particularly enjoyed the celebration at Care UK’s Mountfitchet House home in Essex was 95-year-old Joan McAdams. Like Dame Vera, Joan was also part of the Entertainment National Service Association (ENSA) and risked her life to boost morale and entertain the Allied Troops during the Second World War.

During the war, Joan travelled throughout the UK performing in theatres, military hospitals and even on the ‘Defiance’ ship. She fondly remembers performing in the Queen Victoria Hospital in East Grinstead, which cared for badly burnt troops.

Joan said: “Singing “We’ll Meet Again” brought back so many memories. It was a terrible time, but also one full of community spirit and camaraderie. In spite of the air raids and fighting, we always kept singing and dancing to keep the soldier’s spirits lifted during the darker times. The phrase “the show must go on” was our mantra!”

Debra Fox, Care UK’s national expert in dementia, commented: “Vera Lynn is an iconic figure for many of our residents, so what better way to celebrate her 100th birthday than with a sing-along to her most well-loved song.

“Singing can be a powerful reminiscence activity, and many of our residents will have grown up listening to her music. Even when memories become particularly hard to remember, sometimes music like this can still be recalled.”