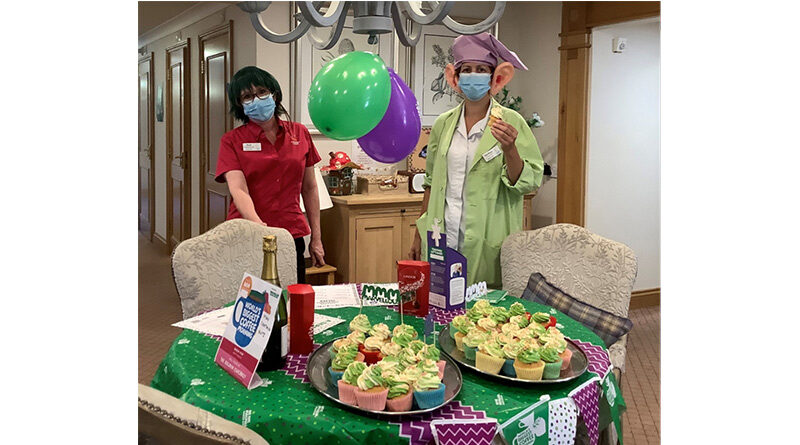 As they raised their mugs and tucked into fresh homemade cakes and pastries, hundreds of Colten Care residents and staff enjoyed a Willy Wonka-style twist on the annual charity get-together.

Chefs at each home in Hampshire, Dorset, Wiltshire and West Sussex included a ‘Golden Cupcake’, with an edible golden centre, in every batch of cakes they baked and served.

Each lucky recipient of the tasty treat has been entered into a draw with the chance to win a prize worth £500 – made up of £250 in shopping vouchers and an equivalent £250 donation from Colten Care to Macmillan on their behalf. The overall winner will also win a bottle of bubbly.

Amid smiles and laughter all round, Frank Garrett, a resident at Wellington Grange in Chichester, was overjoyed to ‘strike gold’.

Frank said: “I couldn’t believe it, what a fantastic surprise. I hope I win the champagne.”

As well as the search for a golden cupcake, this year’s Macmillan fun at Colten Care included a ‘soak the manager’ challenge.

Residents and colleagues at Wellington Grange stepped up to pelt Home Manager Helen Smith with wet sponges or watched from the sidelines.

“What a fun afternoon it was and what a good sport Helen was for accepting the challenge,” said resident Joan Malcolm. “It was a huge success and Helen was well and truly soaked.”

There were also raffles and cake sales at various homes, plus stalls selling gift items donated by community friends or made by residents in arts and crafts activities.

At Woodpeckers in Brockenhurst, the garden echoed to the sounds of ‘Savoy Songs’ with residents singing along to jazz standards played live by two musicians from the Bournemouth Symphony Orchestra and led by Colten Care’s Music and Arts Partner Fiona Pritchard.

Resident Audrey Wainwright said: “I really enjoyed the afternoon in the sunshine singing along with the music. The staff worked so hard to put it on.”

Among residents at other homes, Ken Vivian, who lives at Brook View in West Moors, Dorset, said: “I have always supported Macmillan. It’s a very worthy cause and I think fundraising is important to raise people’s awareness.”

Ken’s sentiments were shared by Colten Care Operations Director Elaine Farrer who said: “The Macmillan coffee morning is an ideal opportunity to have fun while raising money to help fight cancer in the process. It’s something we are proud to take part in every year.”

Research by Macmillan Cancer Support has shown that the number of people living with a cancer diagnosis in the UK is set to rise from 2.5 million to around four million by 2030. Funds raised at the annual coffee morning provide help and support for cancer patients, family members and carers. For more information, visit macmillan.org.uk.