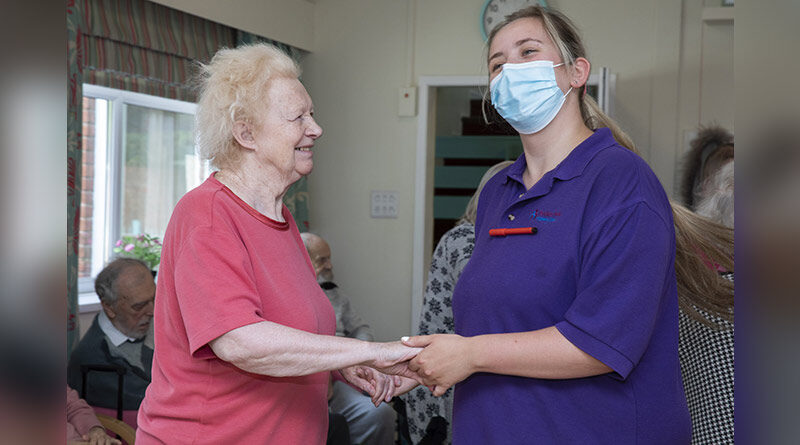 Twinkle-toed residents at a care home danced their way through the decades at a surprise concert courtesy of an award-winning painter.

After the long months of lockdown, Pendine Park’s Hillbury Care Home in Wrexham opened its doors to The Adderbury String Quartet for an afternoon concert, much to the delight of residents and staff.

The performance was funded by talented artist Angela Scott who hosted a charity art exhibition in honour of her sister, 91-year-old resident and former Mayor of Knutsford Jenny Holbrook, who suffers with dementia.

The watercolour painter, who lives at Sodylt Home Farm, Ellesmere, Shropshire, was joined by leading ceramist Caroline Pearce for the fundraiser, which netted more than £3,500 from the sale of 10 of Angela’s paintings while Caroline made a generous donation of £525.

The funds were split between Alzheimer’s Research and Hillbury Care Home, where Angela and Jenny’s niece, Rose Redgrave, daughter of the famous British sculptor, painter and poet, William Redgrave, helped organise an afternoon of music by leading musicians from The Adderbury String Quartet.

Jenny, 91, was diagnosed with dementia 10 years ago and has been living at Pendine Park’s Hillbury Care Home since March following her rapid decline in the first lockdown. 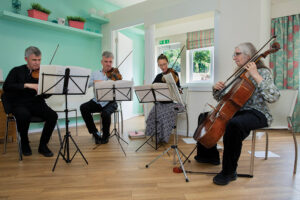 Angela said the music afternoon provided a much-needed boost to her sister and all the residents, who always respond positively to musical therapy.

“It was amazing, it really brought a smile to my face and I just thought to myself, this is just what people with dementia need,” said Angela.

“Jenny was really animated – it was lovely to see. One of the care workers got a lady up to dance and soon, another joined in. There was plenty of foot-tapping and everyone really seemed to enjoy it.

“We had ‘Eleanor Rigby’ and ‘Yesterday’ by the Beatles. It was popular music they would remember and enjoy, mainly from the 70s and 80s. Rose plays the viola and teaches as a professor at the Royal Birmingham Conservatoire so she searched for a playlist that dementia sufferers could respond to.

Hillbury manager Cindy Clutton added: “It was an extremely successful afternoon and the residents really enjoyed it. Music does make a huge difference to anyone suffering with dementia.

“We had a bit of a waltz and a few of the residents were tapping their fingers or feet.

“It’s been really difficult through Covid but we’re starting to bring entertainment in again now, especially music. It has huge benefits for mental health and seeing new faces is so important for our residents.

“Obviously the team did what it could during lockdown but it’s not the same as someone different coming in and presenting a new face.

“Hillbury is very grateful for everything Angela does. As an artist, she plans to come in and hold some art therapy classes with the residents herself so we’re hoping to do that soon.”