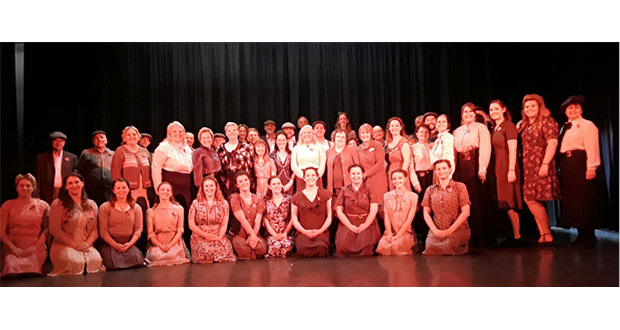 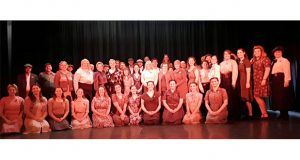 Residents from a Poole care home rolled out the barrel and headed to the theatre to commemorate the 100th anniversary of the end of the First World War – including Joyce Holden, who was given an extra, special treat by the cast.

The residents from Colten Care’s The Aldbury in Ringwood Road, visited the Barrington Theatre in Ferndown to see the wartime classic ‘Pack up Your Troubles’ performed by Poole & Parkstone Productions.

Joyce Holden used to sell tickets for productions at the Barrington Theatre as a young woman and after the curtain fell she was invited up on stage to pose for photographs with the cast.

Joyce said: “I was a member of a drama group which performed at the theatre, but I was always too shy to perform, so I used to just sell tickets to their shows.

“When the cast of Pack up Your Troubles invited me up on stage to have my picture taken with them it was wonderful. It made me feel so involved. They even invited me backstage to have a look around and meet everyone.”

Joyce was accompanied on her special, theatre tour by The Aldbury’s manager Kim Harding.

She added: “My Father used to write pantomimes and would play the Dame, donning a wig and gown.

“My ex-husband also enjoyed drama and played Shylock in The Merchant of Venice and also took part in church plays.”

Lucy Sims a companionship team member at The Aldbury, said: “It was a lovely show and a perfect way for our residents to reminisce over their personal memories of this time. They were all singing along to classics like Roll out the Barrel, the Lambeth Walk and of course Pack up Your Troubles, and many members of the public who were attending said how lovely it was to see them having such a wonderful time.”

Home manager Kim Harding, said: “I would like to thank Poole & Parkstone Productions for such a wonderful show and for enabling Joyce to go backstage afterwards.

“The theatre staff were also extremely attentive and helped our residents to get to their front row seats where they had the best view in the house!”

Pack up Your Troubles cast member Sophie Rix, added: “The residents of The Aldbury certainly made the show more poignant – our thanks to all of those who came.”