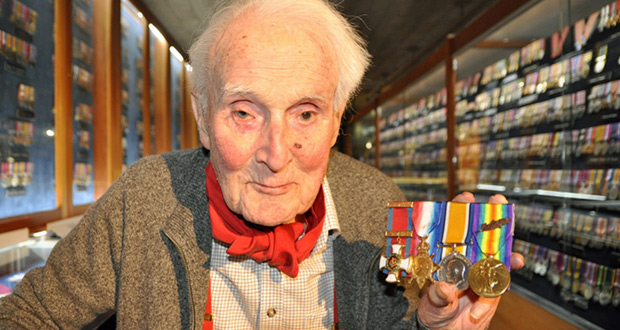 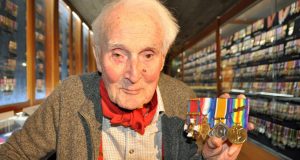 Derek, 98, a resident at Colten Care’s Castle View in Poundbury, asked his carers to take him to see the WW1 medals which he inherited and donated to the Royal Signals Museum in Blandford, more than 13 years ago.

Amongst them is the Distinguished Service Order (DSO) which his father received for “Valuable services rendered in connection with Military Operations in France and Flanders.”

Derek’s father John Parsons was commissioned as a 2nd lieutenant in the Territorial Army in 1912 shortly after leaving school and in August 1914 enlisted in the 1st/4th (Territorial) Battalion, Leicestershire Regiment and qualified as a signals instructor.

The Battalion was active on the Western Front and in October 1915 engaged in the battle of Hohenzollern Redoubt near Auchy-les-Mines. Two hundred men of the Regiment lost their lives on the first day of the battle.

John was later promoted to Captain and transferred to the 66th East Lancashire Division with which he saw action in Flanders and France, including the 3rd battle for Ypres.

In June 1918 and now a Major, John was awarded the DSO on the King’s Birthday Honours list.

He survived the war and qualified as a solicitor in 1920.

He served in WW2 including in India/Burma in 1943–1945 and was involved in the famous battle of Imphal and the historic defeat of the Japanese.

After the war he had a successful career in the packaging and newsprint business.

Derek donated his father’s medals to the Royal Signals Museum in 2005.

He said: “When I told Emma at Castle View that I would like to see the medals again, I didn’t think I actually would. But she got straight on the case.”

Emma (Foxley), a Colten Companion, said: “When a resident has a wish or ambition we make it our mission to grant it and it has been really fabulous to see Derek holding the medals again.

“The Museum has been fantastic in helping us to arrange the wish and very kindly gave Derek and some of our other residents a fascinating tour of the exhibits.”

Derek added: “It’s been wonderful to hold the medals in my hand again. They look as well kept as they were when I gave to them to the museum and it makes me very proud to see them displayed here along with all the others.”

“My father displayed them in a cabinet in our lounge and I know he would be very pleased to know they are here in the museum which celebrates the achievements of his Regiment.”