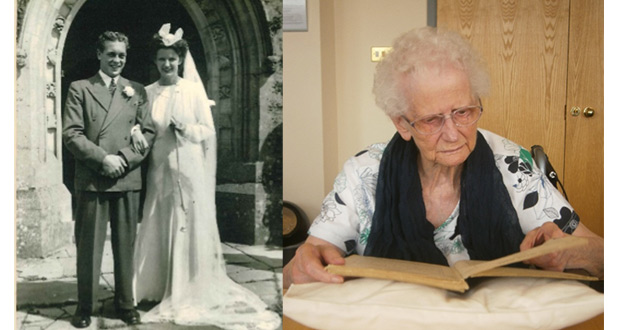 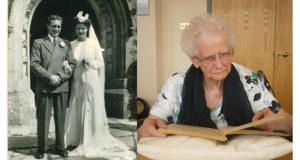 Alice Morgan who lives at Bryn Celyn Care Home in Maesteg, Wales made the emotional 350-mile trip to the RAF Museum in London to view the historical diary, which documents Ronald Morgan’s service as a Wireless Operator in London and Heliopolis, Egypt from 1942 to 1944.

The diary is a mixture of musings and poems from Ronald. It also provides a weary account of receiving news of unsuccessful invasions by Italian and German forces on the supply route of the Suez Canal in Egypt in 1941 and 1942.

He wrote on December 31st 1942: “Although I felt extremely proud of it, I did not forget the men who participated nor their folks either. Germans, Italians, Russians, they’re still men with families at home. God! How I wish this conflict would end.”

Alice married Ronald in the summer of 1946, just a year after meeting him through her own role as a Wireless Operator in Heliopolis after the war in Europe ended.

She donated the diary to the museum 17 years ago, per Ronald’s request to document his wartime experiences.

Ronald sadly passed way in 1958, aged 38 leaving behind Alice and their two sons, Jefferson and Gareth.

Her visit to the museum was arranged by management at the residential and nursing care home after Alice entered her wish to see her husband’s war diary again into the care provider’s national Lucky Star wish competition in December.

She was revealed as one of the home’s winners in May.

Alice, 92 said: “I had a wonderful day, it was very successful and it took me back a long way.

“To see my husband’s diary and snapshots of the war, it was something that I will probably never get to see again but the memories will stay with me forever and I will treasure it. I am truly grateful for the opportunity.”

General Manager at Bryn Celyn Care Home, Mary Richards said: “I am really glad that we were able to assist Alice and make her wish come true.

“As the Manager of the home, I am glad to see that the residents are able to make a wish every year with our support, whether it’s big or small and we get to make them come true. By making someone’s wish come true, you are giving them an opportunity to be happy in their life and the experience truly stays with them forever.”