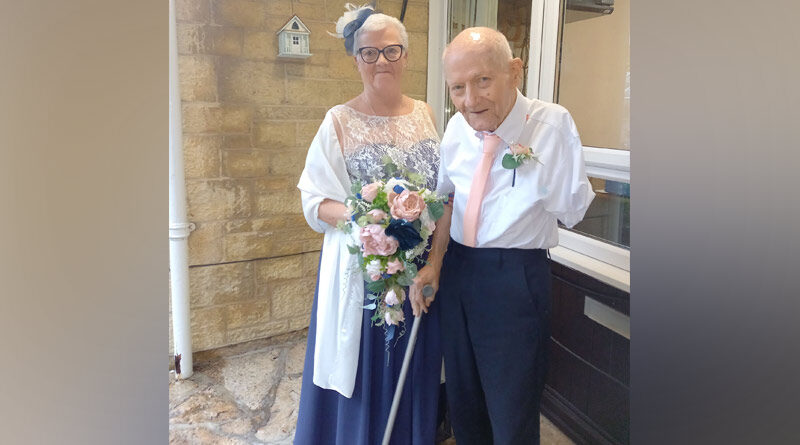 Family, residents, staff and guests gathered together at The Orders of St John Care Trust (OSJCT) care home Grevill House to celebrate the wedding of Jim and Lynne.

Jim and Lynne Hawkins formalised their relationship today, after 42 years as partners, at the Cheltenham care home which Jim moved into this summer. The couple had a small ceremony with two registrars and witnesses, followed by a celebration party hosted by the home.

The new Mr & Mrs Hawkins met when they lived in the same road in Bourton-on-the-Water. Their first date took place in the local pub, and they went on to live in Fairview, Cheltenham, where they brought up their only son, James.

Jim, 81-years-old, moved into OSJCT Grevill House as his care needs, due to living with dementia, increased. Lynne, 64-years-old, has also suffered health issues and is currently undergoing treatment for cancer. Despite these challenges, the couple were determined to get married, and employees at the care home launched a Just Giving page to help raise funds for the wedding.
The team at OSJCT Grevill House was excited to host the wedding and went to every effort to make it a special occasion. The wedding cake and refreshments were made by the catering team and other team members organised the decorations and drinks for the toast.

Early on in their relationship, Lynne proposed to Jim but had been refused. This time Jim agreed to get married. He said: “I’m ready, and I’m getting on a bit!”

Su Heller, Home Manager, said:
“It has been an absolute privilege to support Lynne and Jim with the plans for their wedding day. Everyone here at OSJCT Grevill House is thrilled to see this declaration of their love and affection for each other. Even in the later stage in life, love and romance can thrive.”