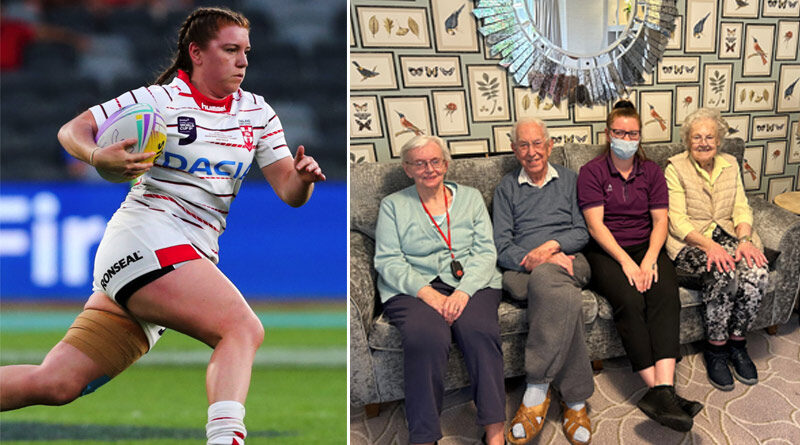 An Oulton care home is getting ready to cheer on one of their colleagues playing for England at the 2022 Rugby League World Cup kicking off on November 1st.

The team and residents at Anchor’s Oulton Manor care home on Wakefield Road are getting ready to cheer on Leeds Rhinos and England Prop Dannielle Anderson, who works as a housekeeper at the home and will be lining up for England for their first match in this year’s Rugby League World Cup.

With all of this year’s World Cup being broadcast on the BBC, Anchor’s Oulton Manor is ready to cheer Dannielle and England on every step of the way! The home will be broadcasting all of England’s matches and everyone is looking forward to getting out their flags and scarves and watching some cracking rugby.

Resident Mary White, 95, is really looking forward to watching the World Cup, saying:
“It’s absolutely wonderful! I can’t believe we’re going to get to watch our Dannielle playing in the World Cup!

“I’ve loved watching Rugby all my life and getting to chat to Dannielle about it is great fun. It’s a lovely bonus to living at Anchor’s Oulton Manor! We’re all really excited for the World Cup, come on England and come on Dannielle!”

Dannielle said:
“I’m really looking forward to the World Cup especially after it was delayed last year. I can’t wait to get started and have everyone cheering us on! I really enjoy working at Anchor’s Oulton Manor and its lovely to chat to the residents and spend time with them. A little chat goes a long way, and we all enjoy talking about rugby!

“I’m so proud to be playing for England, hopefully we will go all the way to the final! It’s also massive for Women’s Rugby that the games are all available to watch on the BBC. It’s great for the sport and it means all my friends at Anchor’s Oulton Manor can watch and give us all the support they can.”