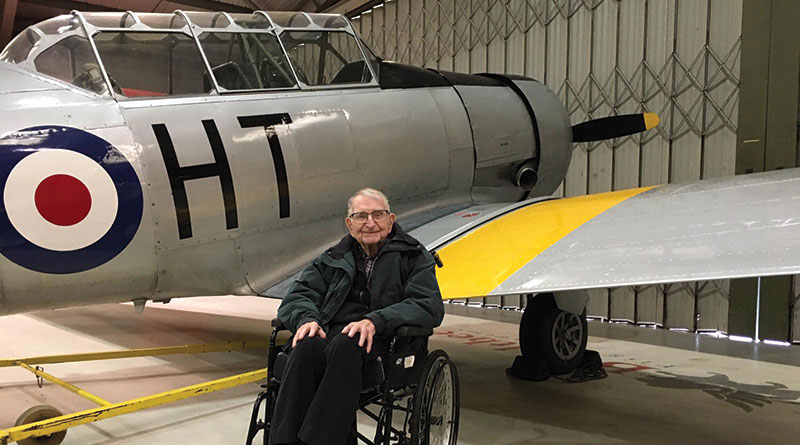 While the number may be unlucky for some, the 13th January actually marks ‘Make Your Dreams Come True Day’ resulting in a very lucky experience for an RAF veteran as he relived his days of flying a Spitfire during the war.

Jack Sussens, who lives at Huntington House, in Hindhead, Surrey, flew both Spitfire and Harvard planes, including to rescue wounded servicemen during missions to the jungle as part of the Burma Campaign, following which he was awarded the Burma Star.

The 98-year-old, who is also a member of the Burma Star Association, had always wanted to see a Spitfire one more time, so staff at Huntington House took him on a special visit to Goodwood to see one of the planes he knows so well.

Following the visit, Jack said: “It was wonderful to see a Spitfire up close again – I have so many memories of flying them during the war. I have to admit though, I used to prefer flying the Harvards, but there’s definitely something special about the Spitfire.”

Talking about his missions to Burma, he added: “The Brits would use bulldozers to make a strip in the jungle so I could land, pick up the wounded in my two-seater plane and fly them to the nearest hospital camp.”

After leaving the RAF, Jack lived with his wife and two daughters in Haslemere, Surrey, working as a bank manager at NatWest in Chippenham. Sadly, his wife died over 30 years ago, so Jack was left to raise his two young daughters – Janet and Gillian, to whom he is incredibly close – on his own.

In addition to his passion for planes and spending time with his family, Jack also loves golf and likes to read, especially the morning newspaper.

Charlie Hoare, director of the Huntington and Langham Estate, where Huntington House is based, said: “Everyone has parts of their lives that shape them as people, and become part of their identity. Flying a Spitfire in the RAF is obviously a hugely important part of Jack’s life, and it’s brilliant that he can still be reminded of it so vividly through seeing a Spitfire in person.”