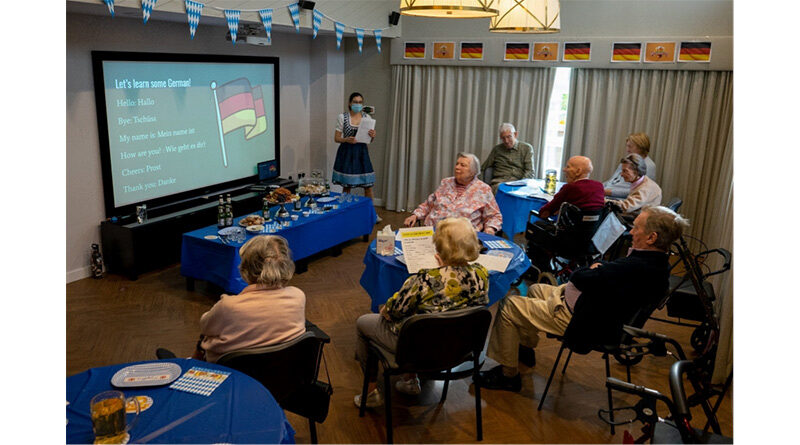 A CITY care home has temporarily transformed itself into a Bavarian Steinhaus, treating residents to beer, sausages and an afternoon celebrating the traditional Bavarian festival, Oktoberfest.

Cramond Residence, the most exclusive care home in Edinburgh, put on a variety of German-related activities for residents, helping build engagement and provide much-needed light relief.

From a beginner’s level language course to learning about the native music and games there was something for everyone to get involved in.

To make the Oktoberfest celebration special, residents helped make decorations and were invited to decorate the event room itself before an afternoon of celebrations.

More than 15 were then able to attend the celebrations, owing to the small group community in place at the home. One of those was 97-year-old Professor Leonard Pompa.

He said: “The Oktoberfest was a great afternoon and had been very well organised by the staff at Cramond.

“There were a host of activities that we could take part in the lead up to the event and even more on the actual day. My favourite part was trying the German sausage – it was surprisingly very tasty!

“It was interesting finding out about the history of the festival and tasting the native cuisine. I think it was one of the best events I’ve attended at Cramond as everyone was really enjoying themselves and got involved in all activities.”

Lisa Sohn, Lead Lifestyle Co-ordinator at Cramond Residence, said: “It’s great to hear the residents enjoyed themselves at the Oktoberfest as it was something different and we had not held a celebration like it before.

“The residents transformed the cinema room and it not only looked authentic but sounded it as well due to several individuals putting their basic German lessons to the test and greeting each other in the language.

“Feedback from residents has been very positive on a whole and we have had wonderful feedback for the decorations, dresses and food so we may have to look at holding this event again next year – hopefully minus the social distancing!”.