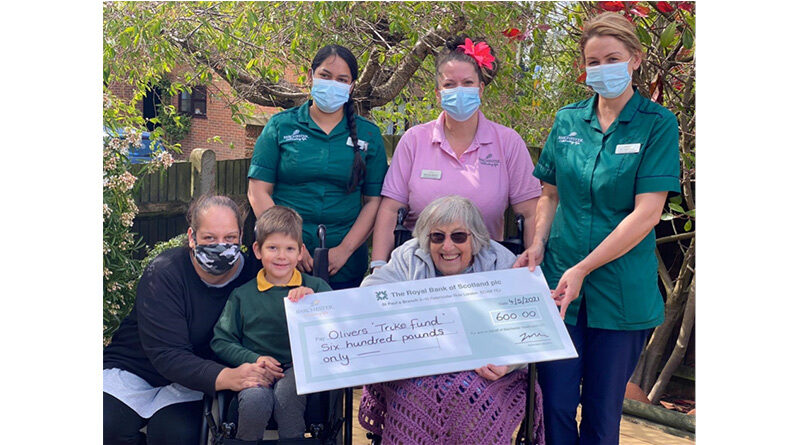 Ashcombe House Care home in Basingstoke has presented a cheque to a local youngster Oliver, to fulfil his dreams to own a bespoke red trike. Residents at the home read about Oliver’s story in the local newspaper and wanted to know how they could help.

Oliver was born 10 weeks early with hydrocephalus, 2 types of spina bifida; one of which being the most severe, fixed talipes ( also known as ‘club feet’) and numerous other medical issues. To date Oliver has had in excess of 2o operations and will sadly have more to come. Oliver is a very determined 4 year old who despite being paralysed from the waist down he has found his own way of getting around, climb onto chairs, sofas and can even get up and down the stairs, Oliver has decided he wants to ride a red bike just like his peers do.

Oliver’s family set up a go fund me page and contacted local press and social media pages to spread the news of Oliver and his Determination, the trike would be like no other and specially made for Oliver with a cost of over £2000.

Barchester Healthcare who own Ashcombe House in Basingstoke run a staff lottery which not only gives employees the chance to win cash prizes but it is also an opportunity to support charities. Every month at least 45% of all proceeds are donated to a charity or community project. The home contacted the Barchester fund and residents were delighted when they received news of the approval to donate to Oliver’s Trike fund.

Oliver Visited Ashcombe House, Worting Road, with his big Sister, Mum Pamela Curson and Gran to receive his cheque. He meet the staff and residents. Resident Margaret Sales was touched reading Oliver’s story and she was happy to hand over the cheque.

Louise Lambert, General manager said: “We are always keen to show as much support as we can to the local community, we are looking forward to following Oliver and keeping in Contact”.