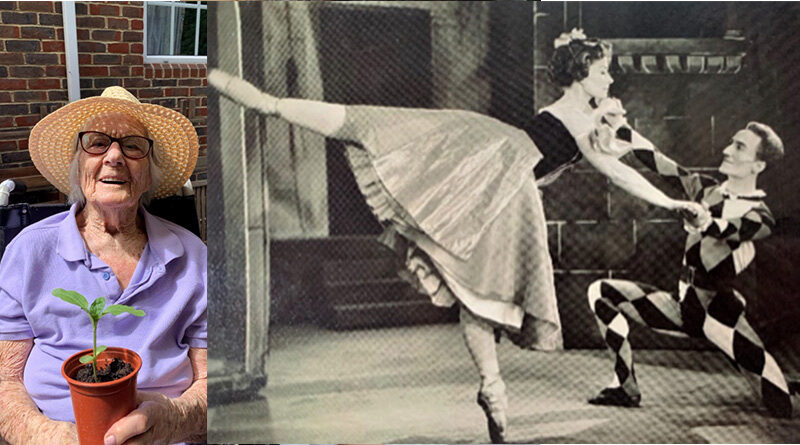 Honouring and celebrating a person’s life journey, their passions and experiences is at the core of the person-centred care that Withen’s Nursing Home is passionate about. Which is why on the 27th March to mark World Theatre Day the home is celebrating their very own star of the stage and screen, Jeanne Palmer or more affectionately known as ‘Bill’.

The dedicated team at the Nursing Home in South Fleet, Dartford know the importance of getting to know the life history of those who live at the home and how it is equally important to involve the residents loved ones in piecing their history together.

“Jeanne has always been a performer, loves to share her fascinating stories with staff who intern also love to listen to them too!”- Sara Morrissey Activities Co-ordinator

Jeanne started dancing at the age of 10, dancing may well have even been in Jeanne’s blood; as the descendant of William Lusby who ran a Music Hall on the Mile End Road in London.

She entered many exams as part of her early years training.  Jeanne received her Elementary Certificate from the Royal Academy of Dance at the age of 11 and went on to complete her intermediate and advanced certificates.  She didn’t just dance ballet, but also has medals for Character, Operatic, National, Musical Comedy, Tap, Greek and Duet dancing.

She was recommended and accepted into the Bush-Davies School under Victor Leopold and Noreen Bush at the age of 14 and at the age of 16 she got her first professional contract in a touring dance troupe.

During the War Jeanne was invited to become a member of the International Ballet.  This was a touring company that performed throughout the UK, working under world renowned Russian Ballet Master, Nicholas Sergeyev.

The International Ballet toured relentlessly, regularly performing from 8 different ballets and up to 16 shows in two weeks; however, for Bill “these were some of the happiest times of my life”.

It was at the International Ballet that she met and fell in love with Principal Dancer Denys Palmer. As Husband and Wife, they spent many happy years dancing together across the United Kingdom and Europe.

It was one of the European tours that Jeanne particular remembers, “that tour was not only the most relentless but also the most incredible experience to share with my husband and the rest of the company. We toured Italy and Spain playing at some of the most famous Opera Houses. In Verona we danced in the Roman Arena. During that tour we played to over 220,000 people!”

Another highlight of Jeanne’s career was performing with the with the International Ballet at the opening of the Festival Hall during the Festival of Britain in 1951.

The International Ballet carried on until is closure in 1953. Jeanne went on to dance on various television shows in the ’50s such as “Cool for Cats” a pop music show.

The 1960s saw Jeanne do ‘the best job of my life’ – become a mother to Nick and Lucy, and she’s been an expert at that ever since said her son Nick!

Withen’s Manger Amadu Timbo spoke about Bill and their plans for World Theatre Day, “In the summer of 2020 Jeanne helped us to choregraph a synchronised swimming wheelchair routine for both residents and staff, she loved giving us all pointers on our dance moves! For World Theatre Day we will be screening a performance of one of Jeanne’s favourite Ballets, Adolphe Adam’s Giselle. Here at the Withens we understand the importance of knowing the individual life stories, histories and interests of each person who lives here. We ensure that we regularly reminisce and acknowledge those aspects through our person-centred approach to all aspects of care.”