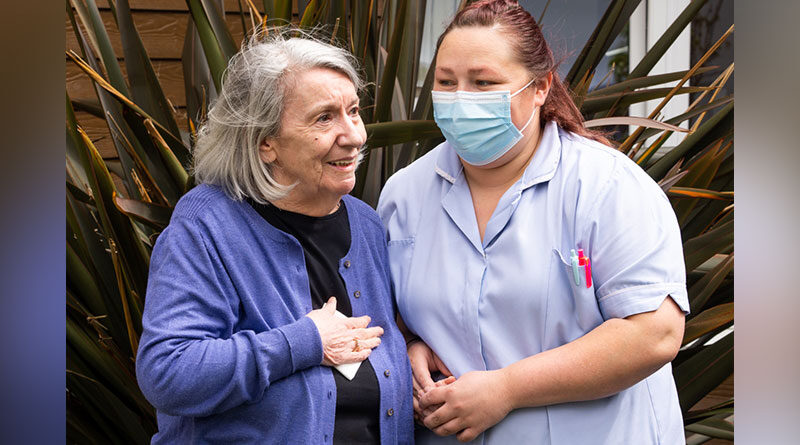 A UK care group has shared the remarkable story of three carers who have been reunited with their former schoolteacher in a Scottish care home – with their roles reversing as the trio now look after and care for their old secondary school teacher.

Jamie Giles, 37, Diane Ferry, 46, and Natasha Maunder, 30, are all carers at Balquhidder House, near Alexandria, part of Handsale Care Homes, and they have a host of fond memories of their school days, including their former teacher, 72-year-old resident, Irene Mowatt – whom Natasha credits as inspiring her to get into the care sector.

Irene, a Glasgow University graduate, dedicated more than 30 years of her life to teaching English Literature, starting at Sacred Heart High School in Paisley, before retiring from Vale of Leven Academy in 2007 – following 22 years of devoted service.

What started as a student-teacher relationship in the classroom has now transitioned into a heart-warming tale of friendship and support following Irene’s move into care – proving that timeless friendships can be forged at any age, anytime, anywhere.

Commenting on his relationship with Irene, Jamie, who has worked in care since she was 23, said:
“Irene is a wonderful lady and we have such a laugh together. She always brightens my day and sometimes we reminisce about my school days which never fails to bring a smile to both our faces. Irene was an amazing teacher and it’s because of her that I passed my higher English exam – and for that, I’ll always be grateful!”

Meanwhile, Diane, who is in her sixth year as a Care Assistant at Balquhidder House, said:
“I feel a great deal of privilege in helping Irene in her latest journey here at Balquhidder. I remember her as a no-nonsense teacher – even the toughest students tended to behave in Mrs Mowatt’s classes!”

The third of the former students, Natasha, who has been working in the social care sector since she was a teenager, also commented on the relationship, saying: “It means a lot caring for Irene as she was my teacher at secondary school for my first and second year. I lacked a lot of confidence at school, so Irene worked really hard to build that up by throwing me into situations I wouldn’t usually put myself in, such as reading in front of the class. Looking back, it really went a long way to help me come out of my shell.”

She continued: “Looking after Irene gives me immense pride and I feel like I’m able to give back to someone who had such an influential role in my education, which, of course, played a major role in my decision to become a carer. All I can say is thank you, Irene – for everything!”

Rishi Sodha, Handsale’s Care Director, commented:
“To hear Irene’s story was a really inspiring experience. She’s done so much for her local community, so it’s only fitting that her contributions are still being praised even after transitioning into care. I know it brings a real sense of joy and genuine reward for Jamie, Diane and Natasha to reunite with one of their favourite teachers – and they’re relishing the chance to nurture and care for someone who played such a key part in their formative years.”

He concluded:“Friendships, especially those formed in our school days, are sacred, and the same is true in care homes. It’s good to remind people that friendships can blossom and withstand the test of time at any age, anytime, anywhere!”