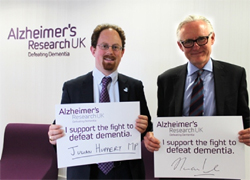 Norman Lamb, the Minister for Care and Support, and Cambridge MP Julian Huppert paid a visit to Alzheimer’s Research UK, the UK’s leading dementia research charity earlier this week. The MPs were given a tour of the Great Abington-based charity’s offices and a briefing on the latest in dementia research, as well as initiatives being planned by the charity in its efforts to defeat dementia.

Alzheimer’s Research UK is one of the UK’s top 10 medical research charities, and is currently investing over £22m in dementia research across the country. The charity has a bold Research Strategy aimed at bringing benefits to patients faster, and this year will roll out a drug discovery programme working with the pharmaceutical industry to speed up treatment development – called the Dementia Consortium – as well as launching its own Drug Discovery Institute.

“It was wonderful to visit Alzheimer’s Research UK and learn more about the many initiatives that are already underway at the charity, as well as those that are planned for the future. Following the recent G8 Dementia Summit, we’ve seen renewed commitments to dementia research from the Government, with an ambition to find a disease-modifying treatment by 2025. Alzheimer’s Research UK’s work is important to reaching this goal, and it was encouraging to see first-hand the energy and passion at the charity for their mission of defeating dementia.”

“It was a pleasure to visit Alzheimer’s Research UK’s offices and hear more about the exciting initiatives being driven by the charity. Research into dementia is vital if we are to understand more about this devastating condition and develop earlier diagnosis, treatments and ultimately a cure for the diseases that cause it. As the UK’s leading dementia research charity, Alzheimer’s Research UK has been behind many of the developments made so far in dementia research. I have no doubt that the charity will continue to advance their research investment further, bringing hope to the individuals, families and friends affected by dementia.”

“We’re delighted that Norman Lamb and Julian Huppert are supporting our work in defeating dementia, and it was great to be able to share some of our ambitious plans with them. With around 7,500 people in Cambridgeshire currently living with dementia, it’s never been more crucial to support pioneering research that could make a real difference to people’s lives. At Alzheimer’s Research UK we’re doing everything we can to put new treatments into the hands of people with dementia, and with the backing of the public and our politicians we know we can achieve this goal.”