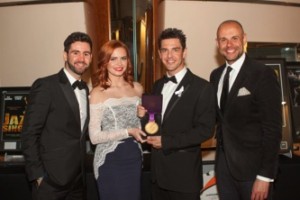 The successful fundraising event was organised by 28-year-old businessman Chris Case in honour of his grandfather, food entrepreneur Stanley Thomas Snr. The 97 year old, who built up a successful Merthyr-based pie-making business and later was a chairman of the Peter’s Pies empire, was diagnosed with dementia two years ago.

As well as a percentage of ticket sales, money for the UK’s leading dementia research charity was raised through an auction, with a host of great prizes up for grabs. Top lots included a Mark Colbourne signed Paralympian stamp, which went for £2,000, golf experience at Celtic Manor with rugby legends Jonathan Davies and Martyn Williams, which raised £800, and signed Charlie Chaplin memorabilia, which fetched £500.

Chris, who organised the event through his family-run property investment company Hollybush Properties Ltd with help from his cousin Stephanie Davies, said:

“My grandfather, who was born in Merthyr Tydfil, was a PT instructor in the Navy and taught soldiers how to parachute from planes and land correctly. While stationed in Edinburgh he met my grandmother and they had their two sons, my uncles Sir Stanley Thomas Jnr and Peter Thomas CBE. They later returned to Merthyr where my mother, Mary, was born and he and my grandmother started a small business making pies which grew over the years to become one of the most successful family businesses in South Wales.

“My grandfather gave a lot back to his local community over the years, which led to him being awarded an MBE and the freedom of the borough of Merthyr. He was a strong, respected man who maintained a high level of physical fitness all through his life. Even up until the age of 95 he was still in the gym twice a week. Sadly, we’ve seen a rapid decline in him over the last two years and he’s now a resident in an assisted living complex called Sunrise of Cardiff. He lives in a specialised dementia care unit called Reminiscence. The team there are fantastic and give him the constant care and attention he needs.

“Seeing my grandfather go through what he has with the disease made me want to organise this event and so many people made it a success. To thank them all would be impossible, however I’d like to reserve special thanks for Jason, Sophie and Mark, as well as Jamie Baulch and his company for running the silent auction. It was a pleasure to arrange this function in aid of such a worthy cause as Alzheimer’s Research UK.”

Chris handed over a cheque for £11,000 to Zoe Baggott, Alzheimer’s Research UK’s Regional Fundraising Officer for the West and Wales, on Tuesday 28 April.

“We can’t thank Chris enough for organising this amazing dinner and dance to boost funds for Alzheimer’s Research UK. This money will help provide crucial resources for our scientists and fund many hours of pioneering research work, driving the next breakthrough.

“There are 850,000 people across the UK living with dementia today, including nearly 4,000 people in Cardiff. Dementia poses one of the greatest threats to public health now and in the future but funding for research still lags significantly behind other serious diseases. We rely on wonderful supporters like Chris to be able to fund our vital research, which has the power to defeat dementia.”