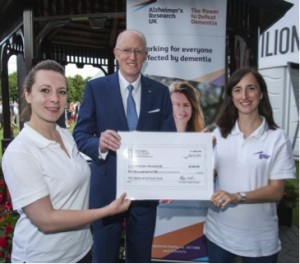 Cambridgeshire-based charity, Alzheimer’s Research UK, has received a boost of $5,000 (equivalent to £3,200) from the Million Dollar Round Table Foundation (MDRT) in America.

This grant has been awarded thanks to Simon Gibson, a Champion supporter of the UK’s leading dementia research charity. Simon presented the cheque to Miranda Johnson, Head of Corporate and Community Partnerships at Alzheimer’s Research UK, and Jodie Vaughan, Community Fundraising Manager, on Saturday 18 July.

Simon Gibson, who lives in Burwell, is a director of wealth management firm Mattioli Woods, based at their Newmarket offices. He has been a member of the MDRT Foundation for 16 years, an international association which represents the top 40,000 financial advisors worldwide. Through its global grants, the MDRT Foundation is committed to building stronger families and communities around the globe. This year it will award member-endorsed grants worth $1 million to more than 100 charitable organisations.

Simon talked about the MDRT Foundation’s generous grant and his inspiration for supporting Alzheimer’s Research UK:

“The MDRT Foundation invites its members to submit applications for charitable grants and this is the second time it’s given generously to my nominated charity, Alzheimer’s Research UK. In 2012 the Foundation awarded the charity $10,000, so to receive a further award of $5,000 this year is incredible.

“As my father, Alan, has been living with Alzheimer’s disease for six years, I am acutely aware of the need for more funding for research, to find the new treatments so urgently needed. I know that this grant will help Alzheimer’s Research UK power forward with its vital work to defeat dementia.”

“We are so grateful to the MDRT Foundation and Simon Gibson for this significant grant of $5,000 and much valued continued support of our world-class research. This will help to bring our scientists closer to finding breakthrough treatments that will change the lives of people living with Alzheimer’s disease and other forms of dementia.

“With 850,000 people in the UK living with dementia, including over 82,000 people in the East of England, the need for investment in research has never been greater. Research holds the answer to dementia, but we rely on our amazing supporters to be able to fund our vital research. It’s thanks to organisations like the MDRT Foundation and people like Simon that we’re able to continue our work.”