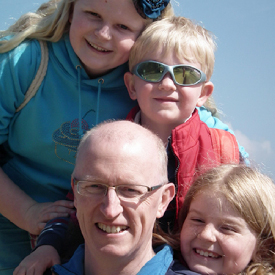 Dad of three, Simon Gibson, from Burwell, Cambridgeshire, has been made a Champion of Alzheimer’s Research UK in recognition of his exceptional support of the Great Abington-based national charity. Simon began supporting the UK’s leading dementia research charity after his 74-year-old father, Alan, was diagnosed with Alzheimer’s disease. He joins a small but growing group of 28 Champions – supporters who have gone above and beyond to help Alzheimer’s Research UK in its mission to defeat dementia.

Since his father’s diagnosis, Simon has been determined to increase awareness and boost funds for pioneering dementia research and has raised over £20,000. He has achieved this through many fundraising activities. These include publishing his debut book earlier this year, A Joke a Day, with all proceeds from sales donated to the charity and securing a £6,000 donation from the Million Dollar Round Table Foundation.

Simon works in Newmarket as a director of wealth management firm Mattioli Woods. He explained his motivation for supporting the charity:

“Following my father’s diagnosis with Alzheimer’s five years ago, I am acutely aware of the need for more funding for research into this devastating disease. Alzheimer’s Research UK is working hard to find the preventions and treatments so urgently needed and I am proud to be doing something positive to help the charity achieve its goals.

“My father was a professional man for over 50 years and famed among other things for his brilliant memory. It’s terribly sad to see that gradually slip away. But as a family we try to focus on what he can do rather than what he can’t – amidst the fears and frustrations there’s a lot of love and laughter. It’s so encouraging to see the progress being made with research and although the breakthroughs may come too late for my father, the work being done now gives hope to future generations. Research is the only answer and I am honoured to be made a Champion of Alzheimer’s Research UK.”

“We are delighted to make Simon a Champion of Alzheimer’s Research UK – he is such an enthusiastic and proactive supporter of the charity and truly deserves this honour. He is always willing to help us make the case for research into Alzheimer’s disease and other dementias and this is our way of showing our appreciation of his hard work and dedication.

“Simon does an outstanding job in raising the profile of our world-class research. His fundraising and promotion of our work is a real asset, helping to bring better forms of diagnosis, preventions, treatments and a cure ever closer.

“There are over 830,000 people across the UK living with dementia today, including over 82,000 people in the East of England. Dementia poses one of the greatest threats to public health now and in the future but funding for research still lags far behind other serious diseases. We rely on public donations to fund our crucial research and it’s thanks to the commitment of people like Simon that we are able to continue our vital work.”