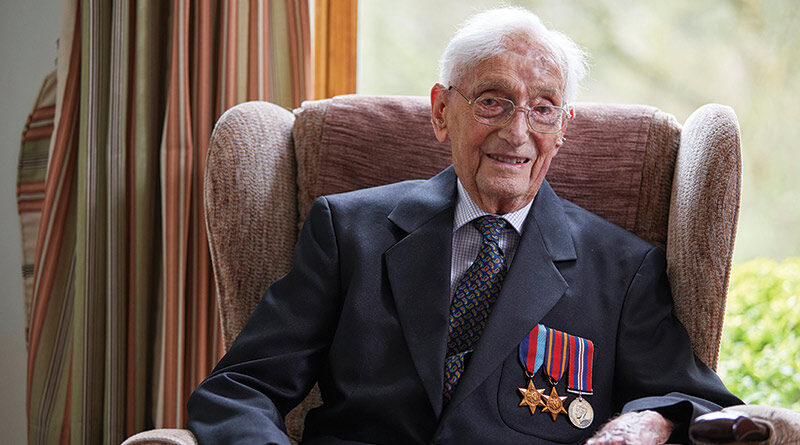 Residents at Royal Star & Garter are preparing to mark Victory over Japan (VJ) Day on 15 August.

Among them are Harry Southern and Peter Whiteley, who were both involved in the Burma campaign during WWII.

The veterans are cared for at Royal Star & Garter. The charity has Homes in Solihull, Surbiton and High Wycombe, and provides loving, compassionate care to veterans and their partners living with disability or dementia.

Harry Southern was serving in the Navy and preparing for a “suicide trip”, when atomic bombs dropped by American forces on Hiroshima and Nagasaki forced the Japanese surrender.

The 97-year-old, who lives at Royal Star & Garter in Solihull, was a Leading Seaman, serving on a small 18-man motor launch (ML). He said: “We were there to harass the Japanese and support the Army as necessary. They needed people moving and we moved them around.”

On VJ Day, Harry was in Trincomalee in Ceylon (modern day Sri Lanka), where his ML was having a refit. “The reason for the refit was to have sound amplifying equipment installed which would make the noise of an armada out at sea,” he said. “The idea was we would cause a diversion to the Japanese, who would think there was an invasion coming down the west coast of Burma. And the diversion would obviously embarrass them because it was maybe three vessels playing gramophone records, just three 18-man crews involved. We were putting ourselves in a great deal of danger. You could regard it in some ways as a suicide trip. If they investigated, we were in trouble. But the bombs dropped and the refit was stopped.”

Harry said any relief he felt at the Japanese surrender was later tempered by the devastation caused to Hiroshima and Nagasaki. He said: “I was out there nearly another nine months before I was drafted home. And we didn’t know the extent of the death and destruction it caused. That filtered through later.”

Peter Whiteley, a 100-year-old at Royal Star & Garter in Surbiton, was involved in direct conflict with Japanese troops while serving in Burma (now Myanmar). He joined the Army as an 18-year-old in 1940, serving in the Royal Engineers. He was part of the Battle of the Box – which provided a welcome victory against the Japanese after successive failures and retreats – and later survived a deadly assault by enemy troops, which claimed the lives of several men he was with.

In Surbiton, VJ Day will be marked with events and activities which include live music from Swingtime Sweethearts. In Solihull, Harry will commemorate the day with the local British Legion branch.