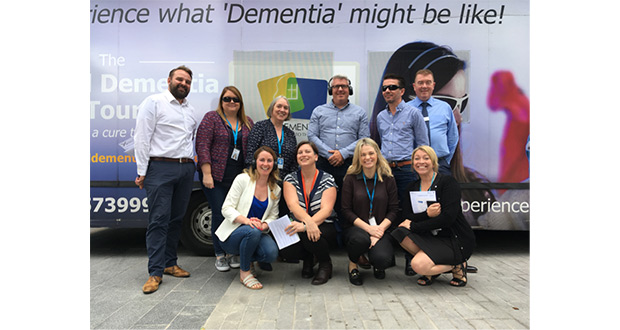 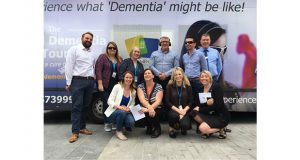 There are currently 850,000 dementia patients in the UK, set to rise to one million by 2025 and two million by 2051[1]. Despite the prevalence of the condition, research from Bupa[1] found that over a quarter of Brits (28%) don’t feel they know enough about dementia. Meanwhile two fifths (38%) would not know what changes they could make to minimise stress for someone with dementia.

To help address this issue, and extend their knowledge of the condition even further, the Managing Director and Senior Leadership Team of Bupa Care Homes have taken part in experiential dementia training. Along with a team of colleagues they got first-hand experience of what living with the condition is like.

The session involved wearing glasses that mimic the effects of macular degeneration and peripheral vision loss, while also using audio and physical aids to help mimic the way that dementia affects other senses. Run by Training2Care, the travelling classroom was at Bupa’s newly-opened office in Salford Quays where 36 colleagues from across Bupa care homes took part in the training.

Aileen Waton, Head of Dementia for Bupa Care Homes, said: “Bupa has a long history in dementia care but, even for someone in my position, this has been both useful and humbling. By experiencing the impacts of dementia first-hand we can be even closer to our residents and make sure that we’re able to support them in the best way possible. There’s no reason why people can’t live well with dementia, and this training has helped us get a better understanding of supporting our residents.”

In addition to training the senior team, the workshop has also visited a number of Bupa’s care homes specialising in dementia care, as well as Richmond Village sites.

Glenn Knight, Managing Director for Training2Care, added: “It’s always great to give people a better insight into dementia, but it’s even better when you know that the training will be passed on to benefit the lives of others. The team at Bupa were really engaged, I’m confident that it’ll have a real impact on the lives of people with dementia as a result.”