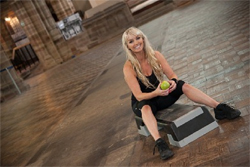 Former Brookside actress Paula Frances Muldoon, from Waterloo in Merseyside, is to host a seven-hour exercise ‘marathon’ to raise money for Alzheimer’s Research UK. Paula, who played Diana Corkhill on the hit soap for three years, is hoping to raise £5,000 for dementia research at the event on Saturday 24 May. She will be spurred on by thoughts of her dad Michael, who was diagnosed with frontotemporal dementia when he was just 55 and died in 2012, aged 64.

Paula, who is also known for her roles in Doctors, Nice Guy Eddie and Moving On, set up the Braveheart Foundation in memory of Michael, with all the money raised through the foundation going to the UK’s leading dementia research charity. In the last two years, Paula has already raised £10,000 with two mass cycle rides – and she is urging people to join in with her latest event to help raise even more.

As well as acting, Paula, 44, also works as a fitness instructor and personal trainer, having begun training to teach exercise classes when she was only 14. Paula will take to the stage to lead some of the classes, with the others to be taught by Nikki Foy. The day will start with a fusion dance class and a burlesque exercise class, with a range of other sessions including body combat, boot camp and pilates. People are encouraged to take part in as many classes as they would like. Classes cost £10 each or £40 for the whole day, and a raffle with top prizes donated by local businesses will help boost the fundraising total.

“The only reason I’m a fitness instructor is because of my dad – I owe him my career, so it seemed fitting to use this as a way of raising money in his memory. Dad ran several gyms and when I wanted to learn to be a teacher he was really encouraging. He would tell me to go for things, and he spurred me on and gave me confidence. I think he’d be proud that I’m doing this event, and I like to think it’s something he would have done.

“I chose to support Alzheimer’s Research UK because I want to support the search for a cure, as ultimately that’s what we’d all love to see. A lot of the people who are already signed up have also experienced dementia, so it’s going to be an emotional day for a lot of us. When it gets hard, you just focus on why you’re doing it and I know that will keep me going.”

“What an incredible effort – it’s exhausting to think about this challenge and we couldn’t be more grateful to Paula for her support. We’ll be thinking of her, and all those taking part, as the event gets under way. Every £20 raised is enough to fund another hour of research into improved diagnosis, better treatments and preventions for dementia.

“With around 18,000 people living with dementia in Merseyside alone, research into the condition has never been more important. We rely on our supporters to be able to fund our research, and it’s thanks to the dedication of people like Paula that we’re able to continue our work.”

The Braveheart Exercise Marathon will take place at Old Christ Church in Alexandra Road, Waterloo, from 10am to 5pm on Saturday 24 May. For more information or to sign up, visit www.corefit.org.uk or call 07850 111671. To learn more about fundraising for Alzheimer’s Research UK, email fundraising@alzheimersresearchuk.org or call 0300 111 5 777.