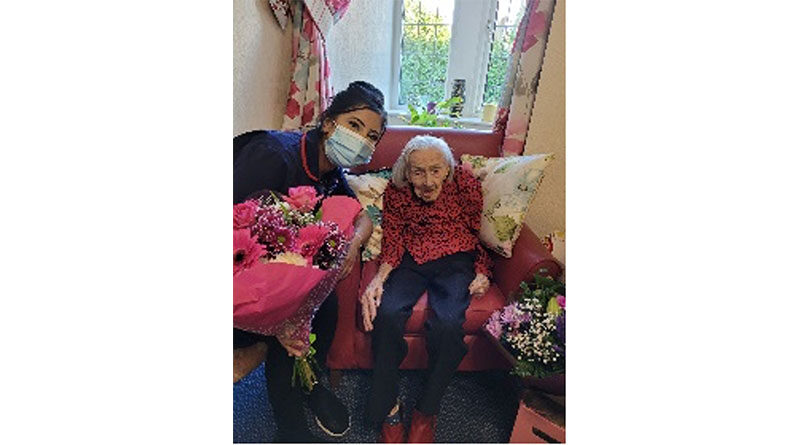 A Bradford woman who painted hundreds of landscape pictures and Yorkshire landmarks, many of which adorn the walls of local homes, has received a special message from Buckingham Palace after celebrating her 100th birthday.

May Monk celebrated her big day with her family and the team at Brookfield Care Home in Nab Wood near Shipley where she has lived for the last nine years.

Originally born in Hull, May left school and enrolled at a local art college, when she was just 11. However, her mum voiced concerns about the lack of career prospects for a budding artist so at the age of 14, May went to work in one of the city’s department stores.

Then in 1941, during World War Two, she was conscripted into the Army, where she joined the Auxiliary Territorial Service and spent the next four years driving ambulances and armoured vehicles.

She has 11 grandchildren and eight great grandchildren and in 2019 decided to put a lot of her artwork up for sale at the Saltaire Arts Trail and donated the proceeds to the RNLI in recognition of her Hull roots and the city’s maritime history.

Commenting on her centenary birthday, May said: “Celebrating my 100th birthday with my family and receiving a message from the Queen has been fantastic. The team at Brookfield Care Home made it extra special, with a wonderful cake, and it really was a day to remember.”

Managing director, Konrad Czajka, from Czajka Care Group, which owns and runs Brookfield Care Home, said: “May has lived an amazing life and is clearly someone who is much-loved by her family and friends and puts others first, from doing her bit in World War Two to selling her artwork for charity. She thoroughly deserved her big day, and it was a pleasure for our team to pull out all the stops for her.”