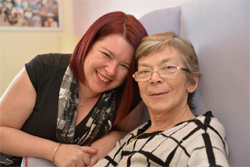 World-renowned Beatles tribute band, the Bootleg Beatles, are set to take Swindon by storm this autumn when they perform at a special fundraising show for Alzheimer’s Research UK, the UK’s leading dementia research charity. The band will headline at The Gig to Remember on Saturday 8 November, which has been organised by committed fundraiser Amanda Franks in honour of her mum, who has early-onset Alzheimer’s disease.

The Bootleg Beatles are recognised as the world’s best Beatles tribute, and have travelled the globe with their show. Over three decades the group have clocked up six Glastonbury performances, sell-out shows at the Royal Albert Hall and even a set at Buckingham Palace as part of the Golden Jubilee celebrations. The Gig to Remember will see the group take to the stage at the Oasis in Swindon alongside X Factor stars Duke Beatbox.

The Bootleg Beatles’ ‘John Lennon’, Adam Hastings, said:
“Alzheimer’s is a devastating degenerative disease, having profound effects on both people with the disease and their whole families alike and we are delighted to help Alzheimer’s Research UK, in our small way, to raise funds and public awareness for the cause.”

Amanda Franks decided to organise the show after her mum, Cathy Davidson, was diagnosed with Alzheimer’s when she was just 58. Now 64, Cathy is looked after in a care home, and Amanda is determined to do all she can to raise money for dementia research.

Amanda said:
“We first started to notice something was wrong when mum began to forget how to cook and things like making a cup of tea became a problem. When the diagnosis of early-onset Alzheimer’s came it turned our lives upside down – we didn’t really know anything about the disease and didn’t realise it could affect someone so young.

“I chose to support Alzheimer’s Research UK because it seemed bonkers that research into dementia is so underfunded. When we were planning the show we knew we wanted the Bootleg Beatles – everyone loves the Beatles! The support has been amazing so far, but we want to sell as many tickets as possible as we hope to raise £10,000 for research. We want everyone to come together and have a good time, with the added benefit of helping the research experts at the same time.”

Jodie Vaughan, Community Fundraising Manager at Alzheimer’s Research UK, said:
“The Gig to Remember is shaping up to be an incredible show, and we’re so grateful to Amanda for organising the event, and to the Bootleg Beatles for their support. Amanda’s £10,000 target would be enough to fund 500 hours of research or vital equipment for our scientists, bringing new treatments for dementia ever closer. With over 2,000 people living with dementia in Swindon alone, research is crucial if we are to bring about better outcomes for people with the condition, and it’s thanks to our amazing supporters like Amanda that we’re able to fund our work.” To buy tickets for The Gig to Remember, which takes place on Saturday 8 November at the Oasis in Swindon, visit http://thegigtoremember.com. To find out more about fundraising for Alzheimer’s Research UK, contact fundraising@alzheimersresearchuk.org or call 0300 111 5 777.