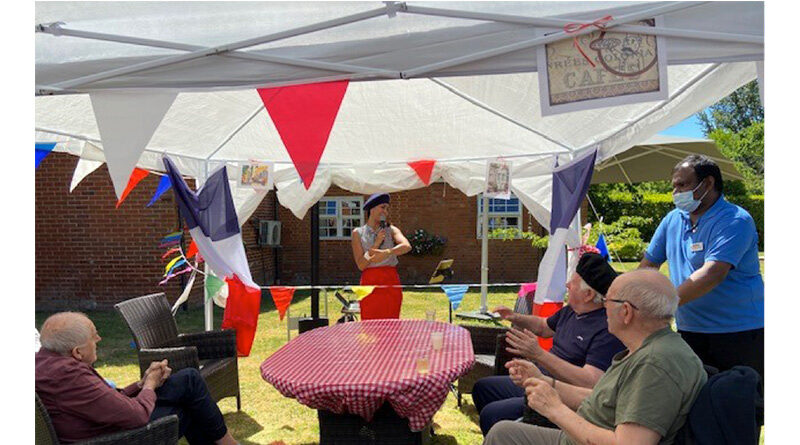 Residents and staff at a Woking care home have left the sun swept Italian shores behind for the romantic culture of France, as its virtual six-month cruise makes its penultimate destination in the picturesque country of love and wine.

With passports at the ready, residents at Nellsar’s Princess Christian Care Centre have disembarked in beautiful France, where many a day trip across the channel will have been enjoyed by residents in days gone by.

Whether it’s a virtual visit to the iconic symbol of Paris, the Eiffel Tower, journeying among the top European collections of fine arts at the Louvre Museum, or serenading a loved one across Brittany, residents will enjoy a month of French-themed activities, decorations, music, cuisine and costumes, from the comfort of their armchairs.

Carol Taylor, Recreation and Well-Being Champion at Princess Christian Care Centre, said: “It really has been South of France weather this month, so it was nice to see our residents slapping on the suntan lotion and enjoying lots of cold drinks in the sunshine.”

The Bisley home even had one of its entertainers, whose native language is French, sing French songs to residents for their cruise stop. Najwa Ezzaher, who is a sound healing practitioner, uses music as a therapy to help soothe and relax residents.

Speaking about Najwa’s sound healing, Carol said: “Najwa applies complementary therapy techniques to help reduce behavioural symptoms among residents with neurological diseases. With her beautiful voice and positive energy, Najwa’s music therapy has had the most wonderful effect on our residents, giving them an uplift in mood, reducing restlessness, and in some cases, diminishing the need for certain medications.

She continued: “Her music also helps our residents rekindle fond memories, which can help them reconnect with their loved ones.”

Dubbed ‘Around the World with Nellsar Cruises’, the virtual ship will dock at a different country each month, with its final destination being the Caribbean, before returning to the UK in August.