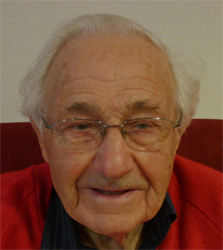 A 93-year-old D-Day veteran has shared his experiences of the Normandy landings ahead of the 70th anniversary of the invasion.

Ron served in the 79th Armoured Division, a specialist unit created specifically to form the first line of attack as part of the Allied invasion force. As part of the Armoured Vehicles Royal Engineers, Ron and his fellow engineers were responsible for landing tanks and clearing minefields set by the Germans before reinforcements arrived.

Ron remembers the months spent training for the invasion: “Although the plans for D-Day were kept secret, all of us knew what we were up to and that liberating France was our overall objective.

“We trained for every possible scenario we could face, practiced climbing over sea walls, training with gadgets and vehicles designed to clear defences on the beaches.

“That training was absolutely essential – the little things we practiced meant that we knew exactly what to expect and what we needed to do.”

Ron landed on Juno Beach on H-Hour, making him one of the very first soldiers to storm the beaches, and was part of a Churchill tank crew that cleared German ordinance to make way for later troops.

Ron says: “Our landing craft dropped us about a hundred yards from the target, so we were about half an hour late. I’ve forgotten most of the horrible parts of that day, but I do remember the Sherman’s driver looking out to the beach and saying, ‘There are already bodies out there’.

“We drove over the beach on the tank, which had a fascine in front of it to clear the obstacles. There was one point when the tank got stuck in the sand and I had to get out – while there were bullets and mortars flying – and get it back into service.

“Fortunately, I’d trained over and over again for that eventuality and I knew that there was a job to do, so I just got on with it.”

Despite overwhelming odds – Allied Command had estimated that Ron’s squadron would lose 75% of the men deployed the first push – only one tank was lost and three men were killed.

Ron continued through Germany with the 79th Armoured Division, earning him two Mentions in Dispatches for “courage and devotion to duty”, including bringing down a German barricade blocking Allied progress across the Rhine.

70 years on from D-Day, Ron now suffers from age-related macular degeneration, a condition which has slowly robbed him of his sight. Since 2012, Ron has been a member of Blind Veterans UK, which has offered him free and comprehensive support to live independently with sight loss.

Ron says: “I’d thrown out my computer years ago because I couldn’t see the screen, but Blind Veterans UK showed me how I could use a PC even with my sight loss.

“A year ago, I couldn’t write at all because my eyesight was so bad; now, I’ve typed up my memoirs with the skills Blind Veterans UK have given me. I bet there aren’t many blokes my age who can use a computer, even with their sight!”

In October 2012 Blind Veterans UK launched its No One Alone campaign – the charity estimates that there are 68,000 plus blind veterans who, like Ron, are eligible for the charity’s services but are not currently aware of this. If you know someone who served in the Armed Forces or did National Service and are now battling severe sight problems, Blind Veterans UK may be able to provide them and their family with a lifetime’s practical and emotional support for free. Call freephone – 0800 389 7979 or go to www.noonealone.org.uk now.