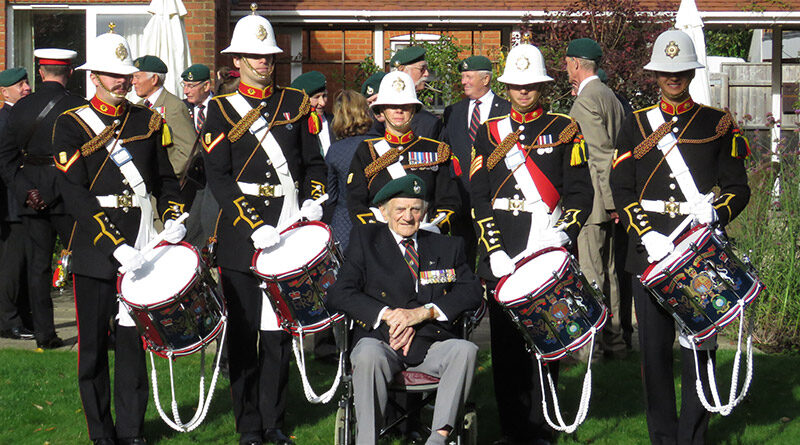 A former commando enjoyed a 93rd birthday surprise thanks to some clever, covert manoeuvres by his family, his Dorset care home and the Royal Marines Association.

Ron Moyse said he was ‘absolutely flabbergasted’ to witness a ‘mess beating’ performed in his honour by five musicians from the Royal Marines along with a visit from two servicemen he fought alongside in the Korean War 71 years ago.

Ahead of the birthday, close co-operation on keeping the arrangements a secret took place between the Association, Ron’s family and Colten Care’s Outstanding-rated Canford Chase in Poole where he now lives.

On the day, Ron said he suspected ‘something was happening’ when his son Rob, himself a former Royal Marine with 25 years’ service, arrived in uniform and there was talk of Ron being invited to go into the garden.

But Ron quickly entered into the spirit of the occasion, asking for his beret and medals, and saying he would be delighted to be taken outside.

Unbeknown to him, five bandsmen had arrived and, temporarily stationed in the home’s summerhouse at the end of the garden, changed into their uniforms until the order came that Ron was in position and it was time to play.

The five then stepped out onto the lawn and in full ceremonial regalia saluted Ron on drums and bugles watched by a gathering crowd of Association members, Canford Chase residents and staff, and other well-wishers.

Among the visitors were former Royal Marines Jack Edmunds and Cyril Blackman who served with Ron in 41 Commando, a unit attached to the US Marine Corps during the Korean War.

The combined force saw intense action during the Chosin Reservoir campaign, fighting off Chinese forces that outnumbered them four-to-one. Almost half of Ron’s unit were killed, wounded or captured.

The unit’s contribution was recently recognised by the South Korean government producing framed certificates of thanks available to all surviving members.

Ron, Jack and Cyril were proud to show off their certificates in Korean script during the birthday visit.

Reflecting on his birthday, Ron said: “It was a complete surprise, I was absolutely flabbergasted to see all my old friends especially those I served with in Korea. I realised something was happening, but I had no idea it was anything on that scale. When I watched the bandsmen play I thought to myself, ‘That was me at 14’. It was such a happy day.”

In a thank-you note to the home, Ron’s son Graham, a Royal Navy doctor who also served with the Marines, said: “It really did cheer up my father, an upstanding man and a gallant Royal Marine.”

Canford Chase Companionship Team Leader Julie Wathen said: “We were privileged and delighted to help Ron and family celebrate his 93rd birthday. It was a truly special day and a great spectacle for everyone to enjoy. We thank the Royal Marines Association, especially their representative Rod Playford, and everyone else who helped make it happen.”