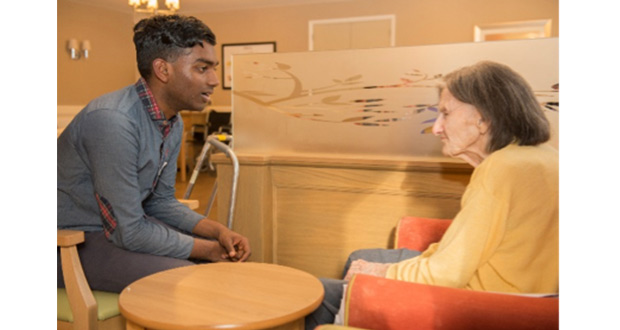 A charity that sets up and runs befriending schemes that have contributed to care homes being upgraded to outstanding is looking for more care homes to join the scheme.

“Nearly one-in-four of the care homes that we have worked with have been upgraded to outstanding – that’s way above the national average, ” said Tony Gearing MBE, who founded the charity YOPEY.

The charity started trialling its YOPEY Dementia Befriender schemes in two homes in 2013. By 2018 it had perfected its model and has so far worked with 17 homes – of which four are rated outstanding by the Care Quality Commission.

YOPEY recruits, trains and supports young people from schools to visit their local care homes. The young people report their visits to the charity, which compiles evidence for the homes to show the CQC. “Typically the care home will have records of hundreds of visits to show inspectors,” said Tony. “This truly is an evidence-based scheme.”

The most recent upgrade was for Windmill House in Wymondham, Norfolk. The CQC report credited the young people – known as ‘YOPEY Befrienders’ – with reducing residents’ isolation.

The outstanding report says: “At the time of inspection, they had a scheme where young people came into the home. They match volunteers to activities and individuals within the home. This helped to reduce people’s isolation and was particularly good for people who did not like big group activities.”

An example of the friendships that resulted was a retired teacher with dementia and a musical young person. The resident reported: “Being part of activities makes me feel not just part of the furniture, I love chatting and singing. I am not very good writing words but I enjoy company and music.”

The resident and others were able to attending singing groups in the community, partly because the YOPEY Befrienders escorted them.

Windmill’s activities co-ordinator told the CQC inspector: “The benefits are getting to meet younger people with new ideas, and they bring their own special qualities like art and music. They have time to sit and chat and that’s the most valuable thing you can do, particularly room visits.”

The young people were also mentioned in the outstanding report about a care home in Bury St Edmunds, Suffolk:

“There were strong links to the local community. The home had joined up with a local college to be involved in a weekly befriending scheme. On a weekly basis pupils from the college spent time with people living at St Peters House.”

Many of the young volunteers want careers in healthcare and a few go on to work at the care home they visited. This is how St Peter’s got one of its team leaders and Lancaster Court in Watford – which went from requires improvement to good while YOPEY Befrienders were visiting – also gained at least one carer through the scheme.

“I’m not suggesting our befrienders enabled these homes to achieve outstanding status,” explained Tony. “But the young people and this charity definitely contributed to the homes being upgraded.”

Tony, who was made an MBE in 2017, is a former national newspaper journalist and so YOPEY is very good at getting publicity for the care homes taking part. “One home got 12 pages of positive press in its local papers over two years. All the care homes we have worked with have had at least one good news story published about them.”

YOPEY, which is based in Newmarket, is looking for more homes particularly in the East of England – Bedfordshire, Cambridgeshire, Essex, Hertfordshire, Norfolk and Suffolk – to join YOPEY Dementia Befriender, but will consider applications from care homes in other parts of the UK.

The charity asks the homes to make a financial contribution to its running costs, but can reduce this if it secures grant funding.