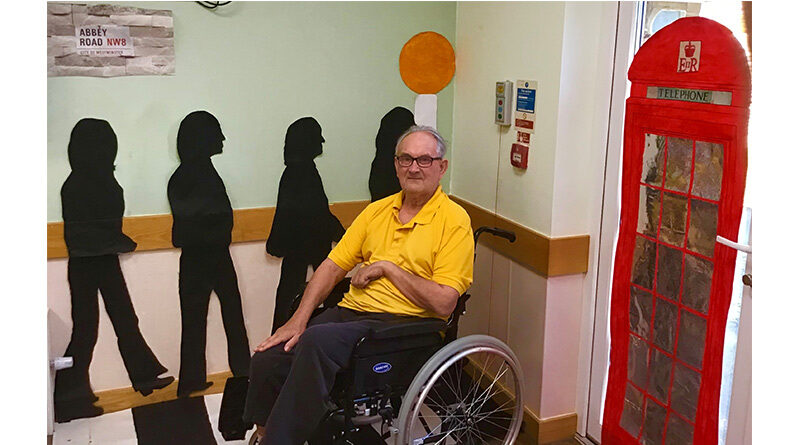 When it was decided all that a lounge at an Isle of Wight nursing home needed was love, Beatlemania provided the inspiration for its transformation.

As a result, the lounge at Highfield Nursing Home in Queen’s Road, Ryde has undergone a revolution and is now decorated as the front covers of the Beatles’ Abbey Road and Magical Mystery Tour albums.

Nursing home manager Andreaa Buciuman gave the task of brightening up the room to the two activities coordinators Dee Cooper and Angela Edwards. They drew on their own personal memories and those of their residents about the Beatles to redecorate the lounge at Highfield, which is run by Hartford Care.

With a little help from their friends, staff and residents got to work creating the iconic images. On one wall are the silhouettes of the Fab Four walking on the zebra crossing which has been painted on the floor and a telephone box completing the scene.

On the other wall is the Magical Mystery Tour Bus, complete with images of the staff at residents at Highfield.

Explained Dee: “I felt that reminders of World War 2 were rather dreary and dark, and I also realised that our residents living with dementia were either babies during the war or had not been born by then.”

Having got to know the residents, their memories, jobs and hobbies, she discovered their “good times” memories were rooted in the 1960s/70s. That gave her the idea of creating a retro theme for the room especially as most of the residents remembered the Beatles and their music.

“When I discussed the project with Andreea, she screamed with delight and I discovered she was also a huge Beatles fan, especially of John Lennon!” Dee said.

Commenting on the results, Andreaa said: “We are absolutely thrilled to having this wonderful room full of memories at Highfield Nursing Home. Our residents absolutely love it as it is a fantastic reminder of the Swinging 60s during which many of them were growing up and enjoying the music of the Beatles.”