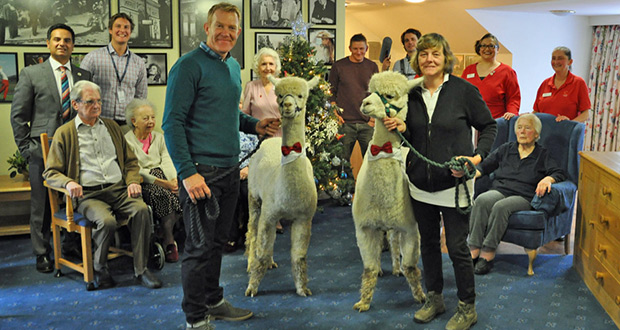 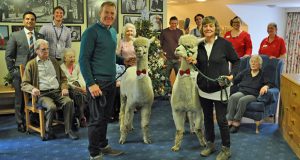 Residents and visitors at Newstone House did a triple take when they were visited by BBC Countryfile star Adam Henson and two alpacas.

Adam and alpacas Oliver and Jimmy were filming at the Colten Care home in Sturminster Newton for an upcoming episode of Countryfile.

Adam met residents in the home’s lounges and indoor beach and even took his furry friends in the lift, to visit some people in their rooms.

He said: “Of all the strange things I’ve done, I’ve never been in a lift with alpacas!

“But the boys are extremely well behaved and I have had a wonderful day here at Newstone House, talking to residents about these fascinating animals and also the animals they have owned during their lives.”

The presenter, his cameraman and sound engineer were invited along to the home by Wendy Williams, the owner of Alpaca Adventure in Shaftesbury and a regular visitor to Newstone House.

Wendy, who owns Jimmy, Oliver and 34 more alpacas, explained: “I wrote to Countryfile to tell them about my alpaca walking breaks and was thrilled when they said they wanted to visit us.

“They were also very interested to hear how I take my animals to visit Colten Care’s care homes.

“The alpacas are very soft to the touch and always elicit a great response from care home residents, including those with dementia. So I asked Newstone House if we could visit them too and they were glad to help.”

Sohail Daniel, the manager of Newstone House, was also interviewed by Adam Henson.

He said: “Our residents and all the staff love Countryfile and it has been wonderful to show Adam and his crew around.

“After seeing the response of our residents to the alpacas Adam said he is considering introducing them to his own visitor farm in the Cotswolds, which is fabulous.

“Now we can’t wait until December 10th when we’ll all be gathering around the TV to watch Newstone House on Countryfile.”

The programme will be broadcast on BBC One, on Sunday December 10 at 6.20pm