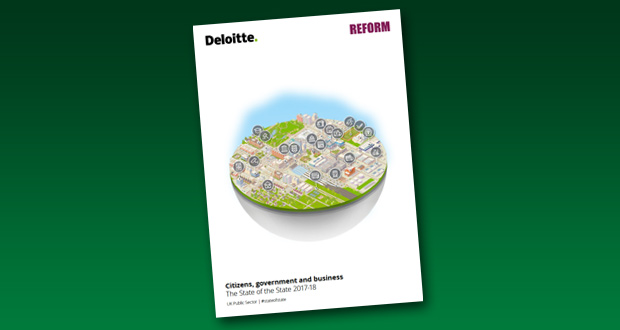 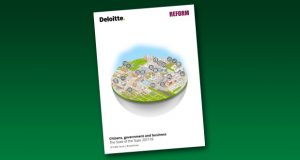 Ahead of the Autumn Budget on 22 November, Deloitte’s public sector and economics teams set out their thoughts on the outlook for public services, the economy, social care, local government and infrastructure.

Also included are key figures from Deloitte’s The State of the State 2017-18 report which included surveys of UK citizens on public spending and social care, as well as a survey of businesses on their local economies.

“Public and political clamour for increasing public spending is growing and the Chancellor himself has acknowledged that the public may be weary of the ‘long slog’ of austerity. However, if the UK remains on its path of reducing the deficit and paying down debt, the dilemma for the Chancellor in this Budget is striking a balance between loosening the purse strings in response to public opinion and restoring the public finances.

“Our analysis suggests he may have some wiggle room in being able to bring in extra revenues, but we’re unlikely to see any great shift back to the levels of spending growth we saw before the financial crisis.

“Without extra public spending we are likely to need a re-energised vision of reform to make taxpayers’ money go further and see public services through a challenging few years ahead.”

“Poor productivity since the financial crisis means that the Office of Budget Responsibility is set to cut its estimate for long term GDP growth, just as the Bank of England did on 2nd November. Slower trend growth throws a spanner into the works of deficit reduction just as pressure for more spending on the NHS, prisons and public sector pay is intensifying.

“It’s not all bad news for Mr Hammond. A decent global recovery is underway, UK activity has cooled, not collapsed, and government borrowing is coming in under forecast.

“Mr Hammond’s deficit reduction rules give him some headroom for more spending. I think he’ll modestly raise spending in key areas and stick with his key target for getting the deficit below 2.0% of GDP by 2020-21.

“But anyone expecting fireworks from this budget are likely to be disappointed. Politics and economics dictate that there’ll be no break with the commitment to eliminate the deficit and no big giveaways.”

“The Budget presents an opportunity to start a discussion about the radical solutions needed to put our social care system on a sound footing. Investment from government is not the only answer, demand is rising and the provider market is unable to keep up. Our research has found that the public is largely uninformed, unconvinced and unprepared about many aspects of social care, all of which needs urgent attention.”

Key statistics from Deloitte’s research include:

“The inexorable shift that councils find themselves in continues to move them from providers of services to a more commercial and investment-focused mindset. As central government funding becomes linked to a variety of outcomes, including business rate income growth, ensuring they can generate a thriving local economy is becoming more central to the purpose of local government.

“Councils would like to see this Budget give them greater flexibility to invest in local infrastructure, particularly housing, and incentives to reform high-dependency public services such as social care.”

Key statistics from Deloitte’s research include:

Nick Prior, global head of infrastructure at Deloitte, said:

“Any progress this Budget can make on infrastructure investment would help the UK economy, its flagging levels of productivity and attempts to rebalance growth across the country.

“I would expect to hear some positive rhetoric on infrastructure but, in reality, very little new funding made available anytime soon.

“We could see some new proposals on house building, which has forced its way up the political agenda. But given the scale of the affordable housing deficit and the economic backdrop, any new initiatives will likely be a drop in the ocean on what is a huge challenge.”