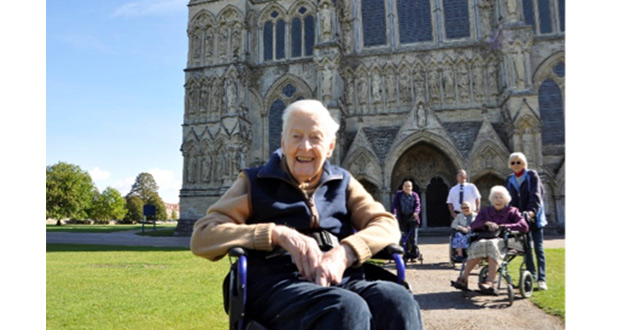 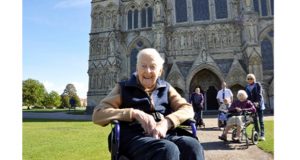 Salisbury Cathedral hosted a happy reunion when one of its most popular volunteer guides made a return visit at the age of 93.

Author and historian Tim Hatton OBE was the special guest on a trip arranged by his Salisbury care home.

He spent 20 years as a cathedral guide, mentoring dozens of junior colleagues before stepping down five years ago.

This was his first trip back, something the staff at Colten Care’s Braemar Lodge were only too happy to arrange.

Among those welcoming him was current Head Guide Chris Barnard who joined the cathedral in 2005 and fondly recalls Tim’s help.

Chris said: “Tim has a great sense of humour and a huge knowledge of the cathedral. He helped make us feel like a family. We were and still are a very happy team.”

Fellow guide Mary McGill said: “Tim is such a charming man. We were a smaller team in those days and I remember him and his wife Sarah inviting all of us round to their house for lunch every week. Tim was so interested in the cathedral and was always researching and writing about it.”

Tim is the author of a book on the history of Salisbury Cathedral, The Man Who Moved a Cathedral. He also published an autobiography, Tock Tock Birds, charting his military career including spells with the Indian Army and Gurkha Rifles.

In his 20s, he was a Company Commander during the 1947 partition of the Punjab, helping to escort 100,000 Muslims on foot through hostile Indian territory to the safety of Pakistan. He later had a distinguished career in the civil service and did voluntary work in education.

Reflecting on his return to the cathedral, Tim said: “It’s wonderful to be back. I’ve had a jolly good time and tour round.”

Tim and fellow Braemar Lodge residents were accompanied on their tour and picnic by carers including Companionship Team member Claire Connor.

Claire said: “Tim expressed a wish to revisit the cathedral and we’re so glad to have helped make it happen. It was lovely to see him smiling and enjoying himself on the trip.”

Salisbury Cathedral has a team of around 650 volunteers, including 250 floor guides and 45 flower arrangers. Guides take visitors from all round the world on tours of the famous building and its cloisters.