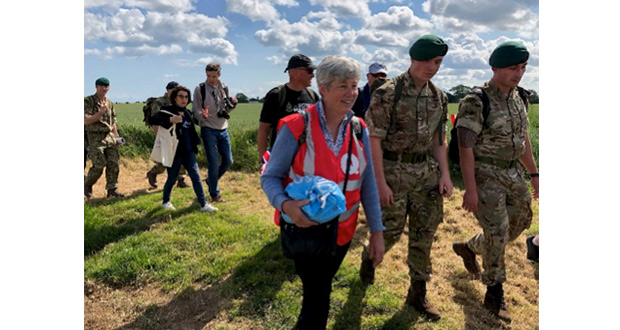 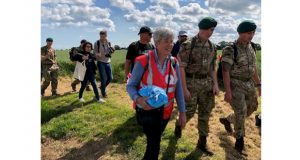 A resident at The Royal Star & Garter Homes who was serving in the Army during the D-Day landings has recalled events leading up to and beyond the Allied campaign.

Joan Sprigg was just 20 and in the Auxiliary Territorial Service (ATS) when the largest seaborne offensive in history commenced on 6 June 1944, serving at the 2nd Anti-Aircraft Group Command at RAF Uxbridge.

She had joined the war effort in 1939, when she fibbed about her age, declaring she was 16 when she was actually 15 so that she could join the Air Raid Precautions (ARP). At 18 she joined the ATS and was transferred to RAF Uxbridge, where she worked as a secretary. Her fiancé Leslie took part in the invasion and survived, and the couple later married.

She was speaking as the Charity’s Homes in Solihull, Surbiton and High Wycombe marked the 75th anniversary of the invasion on Thursday 6 June with a two minutes’ silence and other events during the week.

“We knew that it was coming, that something was imminent,” said Joan, who is now 95 and a resident at Solihull. “There was a great deal of activity immediately before the D-Day landings. When the balloon went up on June 6 we were very busy moving anti-aircraft guns to different parts of the south-east corner of England. From our base in Uxbridge you could hear the naval guns involved in the Normandy invasion. It was a terrible, terrible noise.

“I was engaged to a very dashing sailor who was on a motor torpedo boat. He took part in the D-Day landings. It was organised chaos. I wasn’t to know he was taking part, but I had a good idea he’d be involved.

“It was a combined operation and the Navy, RAF and Army all had their designated roles and the organisation, which was commanded by Eisenhower, was meticulously plotted and it did go pretty much according to plan. Thank God things went our way. There was a tremendous loss of life and a lot of heartache but it was the beginning of the end of the war.”

At Surbiton, poems were read out, while a volunteer from the Home visited the Normandy beaches and took part in a commemorative walk. At High Wycombe, residents attended a service at the war memorial in Marlow, before sharing tea and memories at the local Royal British Legion (RBL).

In Solihull, residents will visit the National Memorial Arboretum on Friday (7 June). Activities Manager Charlie Wilson and Activities Assistant Kevin Dempsey will then give a talk, with photos, about their recent visits to the D-Day beaches.

Surbiton Home volunteer Rosemary Lever, who is also a member of her local RBL, took part in the commemorative walk. It was organised by the Royal Borough of Kingston upon Thames War Memorials Association, and retraced the steps of the No. 47 Royal Marine Commandos, who walked 13 miles under enemy fire to help capture the small French port Port-en-Bessin. The walk raised money for the 47 Commandos charity.

Rosemary’s father-in-law Arthur Eric Lever was in Royal Electrical and Mechanical Engineers (REME) and landed in France about a month after D-Day to support troops and help to build Bailey bridges to enable the advance into Belgium, the Netherlands and Germany.

The walk began at Asnelles, where British Troops landed on Gold Beach, with a ceremony featuring Royal Marines and including a two-minute’s silence and the playing of the Last Post, Reveille and God Save The Queen.

Rosemary said: “To be in Normandy for the 75th Anniversary of D-Day and to have assisted the 47 Commandos charity in retracing their footsteps in 1944 from Asnelles Beach to Port-en-Bessin has been very special, in particular working alongside the Royal Marines. It has been heart-warming to see the British so warmly received by a grateful community who value their freedom.”