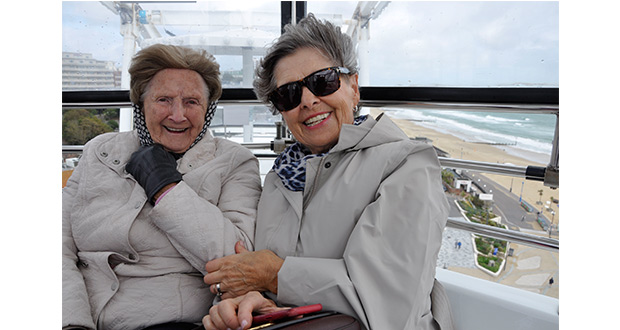 When Dorset care home resident Annie Cardwell was asked how she wanted to celebrate her 100th birthday, she surprised family and care staff by saying she’d like to go over 100 feet above the ground.

Annie, a resident at Colten Care’s Avon Cliff in Bournemouth, had originally planned to ride the helter skelter on the pier, but it had been taken down for the winter by the time her birthday came around.

So the plucky centenarian decided instead to take a spin on the 115-metre Bournemouth Big Wheel on Pier Approach.

Before boarding the wheel Annie admitted to feeling a bit apprehensive about the height – but excited all the same.

In the end, joined by daughter Molly Wainwright and son-in-law John, she was welcomed into her passenger pod to the sounds of Stevie Wonder’s Happy Birthday and treated to three ten-minute revolutions.

Annie said: “It was fabulous. It was a little windy up there but I really enjoyed it. I would do it again any time.”

Born in Batley, Yorkshire, in 1919, Annie moved to Bournemouth with her family in 1962 and worked in Beales department store right up to the age of 82.

Her earliest memories are of school and then starting work in a factory in her teens and getting stuck in the snow on her way in one day.

Asked for her secret of a long life, she replied: “Be happy!”

Colten Companion Sharon Surgeon said: “Annie is living proof that age is only a number. She is a fun and outgoing lady and really cares for her family and friends.

“I was a bit taken aback when she said what she wanted to do – especially as I knew I would have to accompany her too. But we like to make our residents’ wishes come true and so we did.”

As well as Molly and John, family members came from as far away as Portugal and Canada to help Annie celebrate her special birthday.

Owners of the wheel Observation Wheel UK gifted Annie her ride for free.