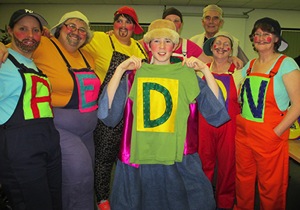 A Hampshire theatre company will start 2015 by boosting funds for Alzheimer’s Research UK. The Unity Christian Theatre debuts its latest production, Once Upon A Time, at The Lights theatre in Andover on Friday 2 January. All proceeds from the family-friendly panto, which will also be performed twice on Sunday 4 January, will go to the UK’s leading dementia research charity. Alzheimer’s Research UK is a charity close to group director Sharon O’Leary’s heart. Her husband, Jim, died with early-onset Alzheimer’s disease in 2006, aged just 57.

Once Upon A Time tells the story of Zacchaeus, a miserly tax collector who journeys to lands afar. During these trips, he recognises the need to change his ways and lead a better life. The fun-filled production is the latest in a line of shows the Andover-based theatre company has staged to raise funds for charity. Since it was founded nine years ago, Unity Christian Theatre has raised nearly £18,000 for a range of good causes close to members’ hearts.

Sharon explained her reasons for organising this year’s panto in support of Alzheimer’s Research UK:

“Jim was a Lieutenant Colonel in the Army and served for 33 years. He was a handsome, charming and sociable man. He was diagnosed with dementia in 2002 and died four years later. He didn’t lose his intelligence, but my once well-spoken husband’s speech got continuously worse over time which led to him being stood down from his job. That was devastating for him.

“At first it was thought he had frontotemporal dementia (also known as Pick’s disease) because it had affected his speech so significantly. Jim was a brain donor and it wasn’t until his brain was analysed after he’d passed away that it was confirmed he had early-onset Alzheimer’s disease. That’s why I feel it’s so important to support dementia research and why I’ll also be donating my brain to research.

“Jim spent the last 16 months of his life at the now-closed Allan Gardiner Unit in Andover. It was during his time there that I set up Unity Christian Theatre. At the time I thought it would be a one-off fundraising concert, but now we’ve grown and write and perform our own plays. Each show we perform is a tribute to Jim and we’re delighted to be able to support Alzheimer’s Research UK and its fantastic work through our latest panto.”

“Once Upon A Time is an original adaptation of the well-known story of Zacchaeus, who famously climbs a sycamore tree in order to see Jesus over the heads of the crowds in Jericho. With a bubbly dame, clown for a son and a host of larger-than-life characters, this wonderful family show offers music, fun and laughter for all ages.”

“Everyone at Alzheimer’s Research UK is so grateful to Unity Christian Theatre for choosing to support our pioneering work. Every £20 raised will pay for an hour of vital research, bringing us closer to finding ways to diagnose, prevent, treat and cure Alzheimer’s disease and other forms of dementia.

“There are over 830,000 people across the UK living with dementia today, including around 20,000 people in Hampshire – one of the highest county figures. Despite this, dementia research remains desperately underfunded. We rely on public donations to fund our world-class research and it’s thanks to the commitment of people and groups like Unity Christian Theatre that we’re able to continue our crucial work.”