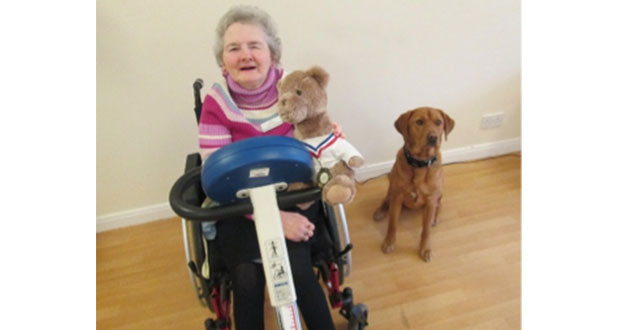 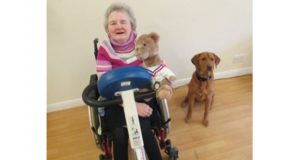 As the UK celebrates Laura Trott’s Olympic success, staff and residents at Drummond Grange Care Home in Lasswade are cheering for their own cycling champion, 63 year old Rhoda Gourlay.

Rhoda, who lives with cerebral palsy and is registered blind, has completed a 412 mile ride on a cycling machine at the care home she lives in. She has been cycling almost every day for four months to reach her target, which equals the distance from Edinburgh to Buckingham Palace.

She says the cycle has given her a sense of purpose again and that while it was a huge distance to cover, the experience brought her great joy.

Rhoda began in April and completed the challenge on 16th August to huge applause from family and friends who had gathered at Drummond Grange, where Rhoda lives. Care home staff threw a special party to celebrate Rhoda’s amazing achievement and even invented a new cocktail, ‘Rhoda’s Delight’, in her honour.

Rhoda has used the cycle to raise money for Barchester’s Charitable Foundation, a charity that helps older people and adults with a disability across Scotland, Wales and England by offering grants of up to £5000.

She has raised well over £1,000 and her final total will be matched pound for pound by Barchester Healthcare, the care provider that runs Drummond Grange Care Home.

The idea for the cycle was suggest by Rhoda’s physiotherapist Gerard Fox, and his assistant Greig Wilson, who knew how much she wanted to do something big for charity.

When she started the challenge in April, her average speed was 3 miles an hour and by the end she was cycling at 4/5 miles per hour. The challenge has had a huge impact on her fitness, as well as her confidence, and she has been an inspiration to everyone who lives and works at the home.

The day after finishing the challenge, Rhoda said: “It has been a privilege to do a challenge of my choice and to raise money for Barchester’s Charitable Foundation. As well as the challenge having given me much pleasure, it has also given me a purpose, a focus, an encouragement to get up and get on with it. I now want to help others at Drummond Grange Care Home with their own challenge.”

Eleanor Wilson, General Manager at Drummond Grange said: “We are delighted to have supported Rhoda in achieving her goal. As a result Rhoda’s physical health and mental well-being has improved. She is happy and positive with regards to the future and she reports that she is feeling much better within herself and sleeping much better at night.”