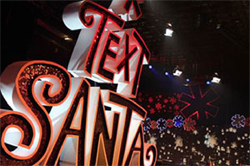 Singer and Britain’s Got Talent judge Alesha Dixon joins the presenter line-up of ITV’s Text Santa for the first time this year, it was announced last month.

Alesha will present alongside Paddy McGuinness for one hour of entertainment as part of the charity appeal on Friday 19 December. Also presenting on the night are Ant & Dec, Phillip Schofield and Christine Bleakly.

The show raises money and awareness for six UK-based charities in the run-up to the big night. This year’s chosen charities are Alzheimer’s Society, Teenage Cancer Trust, Guide Dogs, WellChild, Marie Curie Cancer Care, and Together for Short Lives.

The appeal has raised £15 million for charities since it started in 2011. All funds raised for Text Santa will be distributed equally between the six charities. Money raised will enable 1,800 people with dementia to receive essential one-to-one advice from our Dementia Support Workers, as well as funding a brand new initiative to support younger people under 65 living with dementia.

Amongst some of the entertainment lined up, George Clooney takes part in a specially-written scene of Downton Abbey; The Cube has a unique Text Santa twist and the stars of Coronation Street perform as we’ve never seen them before. Viewers will also have the opportunity to watch real-life films from each of the chosen charities.

Speaking about the event, Alesha said:

‘I’m really excited to be joining the Text Santa team. It’s a great show that does fantastic work for people we all know. As the slogan says: ‘It’s the time of year to help those near’ so I hope everyone digs deep and joins in the fun with me and the rest of the gang on Friday 19 December.’

‘Text Santa is now in its fourth year and not only is it getting bigger and better all the time, but we even have a touch of Hollywood glamour this year helping us raise awareness of crucial charity work in our communities. We’re delighted that Morrisons and Vodafone are once again supporting us to highlight the outstanding contribution of the six very deserving charities.’

It’s the fourth year of the show and supporting Text Santa for 2014 are Morrisons, Vodafone, and The Hut.