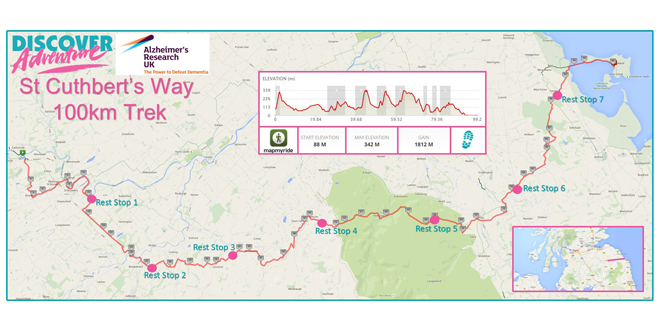 Fundraisers who are seeking a challenge for 2016 are being offered the chance to take part in the charity’s Race the Tide fundraising event, which will see participants trek the length of the spectacularly beautiful St Cuthbert’s Way in Northumberland, taking on some steep hill climbs and rough terrain along the way.

Race the Tide covers a route stretching from Melrose in the Scottish Borders to the Holy Island of Lindisfarne off the Northumberland coast – and walkers will have 30 hours to complete the 100km challenge before the finishing point is cut off by the incoming tide. 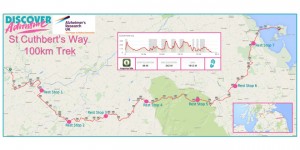 The event, which will take place on 10 and 11 September, will see participants walk through the night to reach the finish line as they pledge to raise at least £400 each for pioneering dementia research. In the run-up to the challenge, those taking part will receive regular updates to guide them through their training and preparation for the gruelling event.

Alzheimer’s Research UK supporter James Hall, from Soham in Cambridgeshire, knows only too well the impact dementia can have, having seen his mum Anne develop symptoms when he was still in his early teens. James, 33, is urging fundraisers to sign up to take part in Race the Tide.

“I was in my early teens when mum started to display unusual behaviour. She had vertigo and wouldn’t go up the stairs in our house. Then later she developed agoraphobia and refused to go out for 10 years. Mum was eventually diagnosed with frontotemporal dementia in 2012, aged only 58.

“Mum’s been in care for a couple of years now and, thankfully, she seems happy. When we visit her she laughs and jokes but we struggle to make sense of what she’s saying. Funnily enough she can sing along clearly to songs on the radio. But we know that Mum’s dementia will progress and we’ll face some big challenges down the line.

“Dementia is a horrible condition which affects entire families and I want to do everything I can to help Alzheimer’s Research UK defeat it. I think Race the Tide is an excellent one of a kind event which gives people the opportunity to really challenge themselves whilst raising funds for a very important cause.”

“Race the Tide promises to be a fantastic event for people who are looking for a big challenge, and we hope to see lots of people join us to support our pioneering research. Every penny raised will be able to help provide vital equipment and resources for our scientists, bringing new treatments, preventions and a cure for dementia ever closer.

“With 850,000 people currently living with dementia in the UK, the need for research to defeat the condition has never been more urgent. Our scientists are leading the way in the search for new treatments, but we rely on the public to be able to fund this work. I would urge anyone seeking a challenge for 2016 to consider signing up to Race the Tide, to help support our vital research.”

For more information about Race the Tide and to sign up to take part, visit www.arukracethetide.org or call 0300 111 5 777. Registration fees to help to cover the cost of the event are £50.