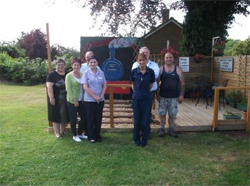 Actress Adele Silva, best known for her role in Emmerdale, joined over 2,500 participants at Roundhay Park as they walked to fight dementia at Leeds Memory Walk.

Alzheimer’s Society supporter Adele was joined by former Emmerdale actor Mathew Bose and Leeds MP Fabian Hamilton as she started the event which is expected to have raised £60,000 for people with dementia and their carers.

Adele, whose nan had dementia, said:

‘I was delighted to be able to support Alzheimer’s Society by starting their Leeds Memory Walk. My nan had dementia so I know first hand the effect it can have on families. It has been wonderful to see so many people of all ages come together to celebrate those that they have loved and lost through dementia.

‘Memory Walk is a great opportunity to not only raise money but also increase awareness whilst enjoying a great day out with loved ones alongside others who understand what it’s like living with dementia.’

Memory Walk is Alzheimer’s Society’s flagship fundraising event which sees walks taking place around the UK throughout the autumn. It is a day to walk, share and celebrate someone special and everyone walks with one common goal: to defeat dementia.

Funds raised from Leeds Memory Walk will be used to support people living with dementia and their carers and to fund research into finding a cure.

Katherine Turner, 39, from Wortley, took part in Leeds Memory Walk with six-year-old daughter Holly in support of grandad John Newell, who was diagnosed with dementia in June at the age of 62.

‘Dad’s diagnosis was a huge shock to our family and we are still coming to terms with it. It’s important that families like ours can get together at Memory Walk and walk with others who understand what we are going through. It was wonderful to see so many people come together and fight dementia whilst having a really great day out.’

‘I’m delighted to have been part of such a wonderful event. There has been a really great atmosphere here today with lots of different generations walking together to fight dementia. Hopefully all the participants have had a fun day whilst helping to raise vital funds for people affected by dementia and their carers.’

‘Today has been a huge success and I would like to say thank you to everyone who took part. I would also like to thank Alzheimer’s Society staff and volunteers, who helped to organise the event as well as Adele, Mathew and Fabian for coming along and lending their support.’