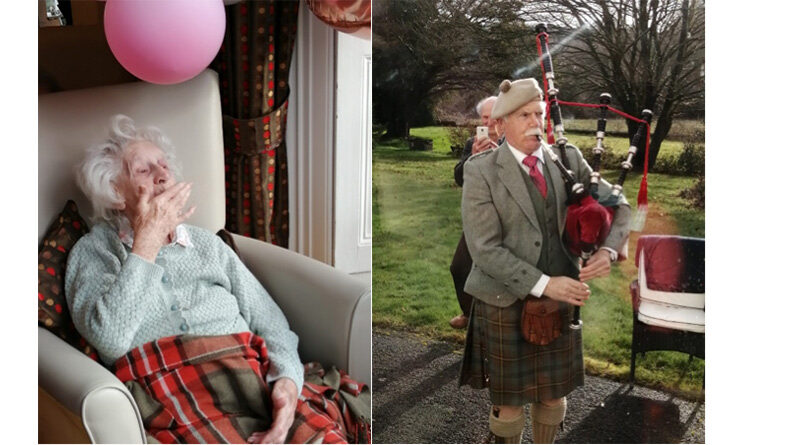 Walstead Place Care Home resident Peggy Chinnock celebrated her 100th birthday this week with a piper and a family visit as well as balloons, a cake and a card from the Queen.

Home Manager Jacquie Ferguson said that Peggy, who has been a resident at the West Sussex home for 12 years, woke up on her birthday to an array of cards and flowers.

“Peggy has a wonderful smile which comes across her face, when people say someone smiles with their eyes that’s our Peggy. To reach 100 years of age is a marvellous milestone and we were delighted to have the pleasure of sharing it with her,” added Jacquie.

Walstead Place, rated as Good overall by the Care Quality Commission (CQC), is a magnificent 19th century country squire’s residence, sensitively converted to provide the highest standard of residential care for up to 43 elderly residents. The home itself is located in the quietly beautiful hamlet of Walstead, just a mile from Lindfield, near Haywards Heath.

The team made a special place for Peggy near the bay window decorated with balloons, so she would be able to see her birthday surprise – which was her family of daughters Angela and Shelia, her son John and daughter-in-law Teresa.

“Her face lit up, she was able to wave to them through the window and was able to open her card from the Queen and she smiled so much when she saw the picture of the Queen and her name in the card,” explained Jacquie.

“But what she wasn’t prepared for was that she thought she could hear bagpipes.

She was correct, her family had organised a sole piper to play some lovely ballads and ‘’Happy Birthday’’ as well which we all sang to her. She has had an amazing day and at the end of it all she just wanted a cup of tea and a slice of her cake and oh …. a walk around our beautiful garden which she loves.”

Peggy, a very hands-on and caring mother and grandmother, was born on February 15, 1921, and has four children and five grandchildren. Her faith, her family and her friends have always been important to her, increasingly so after she was widowed.

She met her husband Bob, who she describes as “my one and only” around the time the Second World War broke out. He finished his teacher training and then spent the war years stationed in the middle east. Peggy joined the Land Army and they married in 1945 once the war was over.

Peggy and Bob enjoyed holidaying in Scotland, Peggy was an energetic walker and conquered several mountain peaks. She was widowed in 1984 but then learnt to drive and really enjoyed the freedom it gave her to visit friends and family.

“Nowadays Peggy prefers the quieter side of life and is happy to sit and watch the world go by. She does not let anything hold her back, if she gets a knock back she picks herself up with sheer determination and carries on.”

Walstead Place is part of the Caring Homes family of 69 homes across the UK. The company celebrated 25 years in the care home industry in 2019 after starting out with just one care home in 1994.