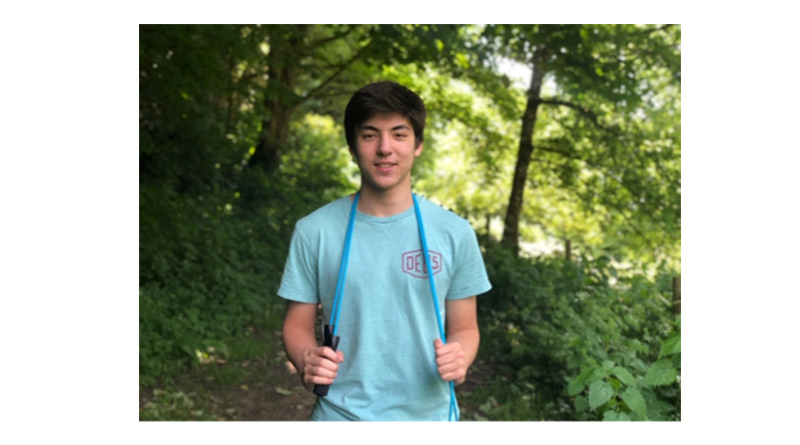 Local Somerset boy, James Byrne, 16, has pledged to skip for 20 minutes straight every day, for a month, (31 days) to raise money for Brunelcare, a charity supporting older people in the South West.

Starting his challenge on Tuesday 12th May, James will skip every day for 20 minutes until Tuesday 11th June, tallying a total of 10 hours and 20 minutes of skipping.

James said: “I wanted to do something to keep busy during these uncertain times, all while making a difference. I know skipping is a great form of exercise, so I married the two together. I’ll skip for 20 minutes, non-stop, daily, to raise money for the charity!”

James chose to raise money for Brunelcare’s Glastonbury Care Home, a care home that’s close to his heart after his late Grandmother, Ivy Byrne, was a resident there for nearly two-years.

James Said: “I saw what an amazing job the carers at Brunelcare were doing and now, wanting to support key workers more than ever, I couldn’t think of a better cause or better time to start skipping!”

James wants to raise a total of £3,000 for the charity to buy important Personal Protective Equipment  and wellbeing supplies to be used around Brunelcare’s Glastonbury Care Home.

Joanna Crago, Glastonbury’s Care Home Managers said: “It’s a great honour that James is fundraising for us at Glastonbury Care Home, it’s such a lovely thought! The team and I want to wish James the best of luck with his challenge. Happy skipping!”

James said: “My parents always told me that actions speak louder than words and it’s nice doing something to help rather than just talking about it.”

David, James Father said: “James’ skipping challenge has been brilliant! The entire idea has all come from James and we are very proud of him. He’s thought of others through this more difficult time and really wants to make a difference, all while keeping in line with Government advice. We are very excited to see his fundraising right through to the end.”

To find out more about how you can donate to Jame’s fund, visit his Just Giving page here: https://www.justgiving.com/fundraising/jamesbyrneforbrunelcare