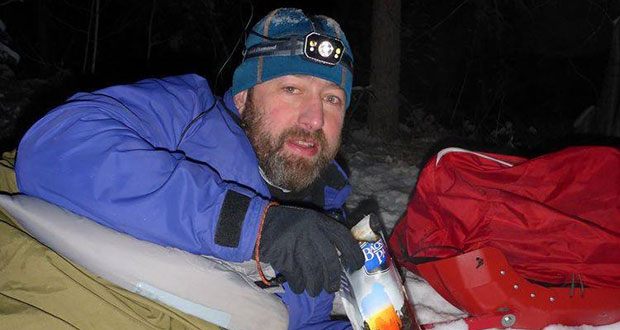 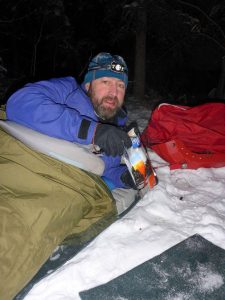 A Care UK care home regional facilities manager, praised by colleagues for his determination in ensuring residents’ wellbeing, has shown the same dedication during a 300 mile race in temperatures as low as -54 degrees.

Now 46-year-old Nick Griffiths, from Bolton, is recovering at home from the fourth degree frostbite that will see him lose three toes after taking part in the Yukon Arctic Ultra, a gruelling trek in the depths of the Canadian winter, to raise funds for one of Care UK’s chosen charities, the Rob George Foundation.

The father of two spent five days at Whitehorse in the Yukon, taking part in survival and race training sessions arranged by the organisers. This, together with a year of tough training on the Pennines, saw the former Royal Marine happy and relaxed about the upcoming challenge. He recalled: “Before the race it was about -20 degrees, which is average for the time of year.

“Training had gone well and I felt strong. I had borrowed high-level equipment from my friend who had taken part the year before, and purchased other specialist items required, so I was confident I was properly prepared. We had talked about the race when we rowed shifts together in the 3,000-mile Talisker Transatlantic Rowing Challenge in 2013.

The Yukon event is split into three races –  a 26-mile marathon and a 100-mile and 300-mile race. Nick said: “At the marathon check point I felt fine. It was cold, but nothing unexpected. But after stopping for a rest and a meal, things changed. It was dark and the temperature dropped to -54 degrees. 80 per cent humidity meant ice crystals were in the air. I had experienced cold weather before, when taking part in Arctic warfare training in Norway with the marines, but that was the dry cold you expect at low temperatures. In the Yukon, moisture on my eyes froze into lumps. I had to use my gloves to try and pull off the ice because I couldn’t see.”

Nick kept going, struggling with hunger and dehydration as his inner gloves had frozen whenever he had removed his hands from his mitts, preventing him from retrieving food or water from the bags on his sled. He and a fellow racer snatched some sleep in high tech sleeping bags, designed to withstand -50 degrees, but still struggled to get warm. In the early morning they managed to light a fire and eat and drink before heading off again.

He said: “I knew my hands were cold, but I was not worried about my feet – they felt OK. We kept pushing on and had been going for around 30 hours in total before a marshal, who had picked up another competitor, checked my hands and found frostbite. The rules of the race state that frostbite means automatic elimination.” 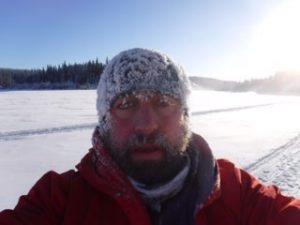 He was taken back to the hotel and then to a hospital in Whitehorse where specialists broke it to him that, while the frostbite on his ears, nose and fingers was superficial, his foot had severe frost bite that would see the loss of toes and potentially the front of his foot.

He spent five days receiving cutting edge treatment in the hospital’s intensive care unit and since his return he has been treated by the burns unit team at Wythenshawe Hospital in Manchester.

He said: “My toes are extremely sore and they reek. I have the dressing changed every other day and special dressings with silver and charcoal help to keep the smell down. It has been agreed by the team here and in Canada that we are going to let the toes drop off. They say about frostbite in Canada “snap them off in spring,” as that is how you preserve the largest proportion of healthy flesh.

Wife Janine and daughters Hannah and Amy have said this will be Nick’s last big adventure. He said: “They have been wonderful throughout my fundraising adventures, but I would not want them to go through the worry of hearing I was in intensive care again.”

He has also had some support from an unusual source. Nick said: “My wife’s dog Max, the sausage dog, normally doesn’t show much interest in me but now every time I sit down he wants me to pick him up. My dog, Harry the cocker spaniel, will not leave my side; it is like they know something is wrong and that I’m in pain.”

Praising Nick’s dedication, Care UK’s head of facilities management Kevin Orme said: “Nick is the facilities manager for 30 homes from Crewe to Aberdeen. He has a great reputation across the business in supporting the homes by always putting the needs of our residents first.”

“He is a very caring person, so it wasn’t a surprise when he told us he would like to raise money for the Rob George Foundation that supports young people living with terminal conditions.

“Nick has a passion for helping others and with a love of extreme sports, the Yukon Challenge was a natural event for Nick to participate in. He did a fantastic job to get as far as he did in the event; we are all proud of him, and whilst the challenge has taken its toll, I am sure it won’t stop Nick’s drive and determination to support others.”

So far Nick has raised £9,500 and you can support his efforts on his Just Giving page: