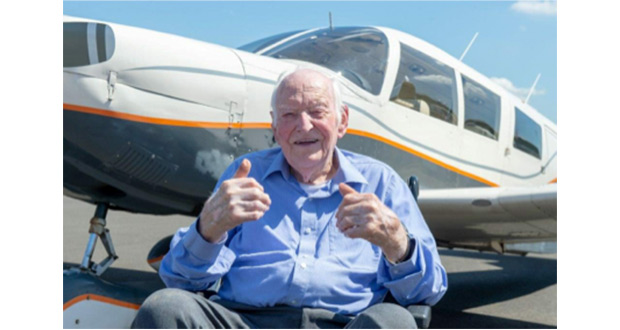 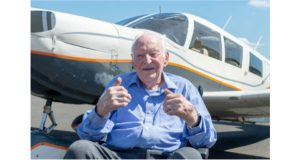 A 96-year-old RAF hero has taken to the skies again nearly 75 years after last piloting an aircraft.

As a former airman, great-grandfather Bernard Rye longed to be airborne once again, but thought his flying days were over until Bupa colleagues arranged a surprise trip as part of a wish-granting programme.

Bernard was whisked aboard a Piper PA Cherokee Six for a 30 minute flight over Dorset and the Isle of Wight, accompanied by his son and flown by a volunteer pilot.

Now a resident at Bupa’s The Links care home near Bournemouth, Bernard joined the RAF in 1940 and toured the world in his Tiger Moth and Avro York planes.

He even had the honour of piloting Louis Mountbatten, the 1st Earl Mountbatten of Burma, during his time in Rhodesia (now Zimbabwe).

During this time he travelled to countries including South Africa, India, Australia and New Zealand and also spent time in the Middle East.

Bernard was nominated for the flying experience by Zoe McCarthy, Activities Lead at the Bupa care home, as part of their #nevertoolate campaign.

The campaign is being run across Bupa care homes to help residents live life to the full, while ticking off their bucket list. Elsewhere, in-home staff have worked to fulfil residents’ ambitions from meeting a musical icon through to seaside days out.

Zoe explained: “Everyone’s got ambitions that they’d like to achieve and being in a care home shouldn’t get in the way of that.

“We all love hearing Bernard’s stories from his days in the RAF and he absolutely lights up when he tells them. That’s why we wanted to help him relive it, and organised his surprise for him.”

After hearing about Bernard’s time in the RAF, Zoe worked closely with fly2help – a charity specialising in aviation experiences – to set up the surprise.

Originally from Enfield, north London, Bernard joined the Air Force aged just 18. An accountant by trade, his mathematical skills were put to use in his roles as a pilot and navigator, which involved calculating flight routes under severely testing conditions.

Speaking after his flight, Bernard said: “I had a thoroughly good time in the RAF and got to see everywhere from South America to Australia and the Middle East.

“It’s been over 70 years since I flew myself, and I never expected I’d be taking to the skies again. It took me back quite a way, and I’m very grateful to the team for making it happen.”