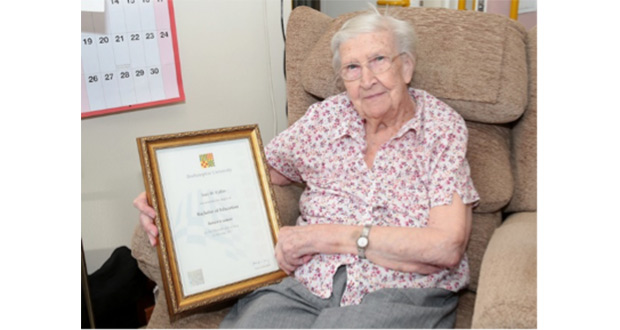 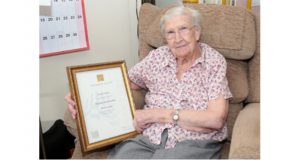 Care home staff were always aware she’d devoted her life to education – but few had any idea of the hardship she’d endured as she trained under constant threat of German bombing.

A few days ago, 95-year-old former Sheffield lecturer Jean Callin became the only resident in the history of Broomgrove Nursing Home to receive an honorary degree.

The arrival of the certificate was as much as a shock to her as it was to care home staff!

The resident – who grew up in the Nether Edge area of Sheffield in the 1920s – landed a much sought after place at Southlands Training College in Wimbledon.

But her 1942 qualification date came in the middle of World War Two with great swathes of London in ruins after weeks of intense bombing.

Her training was put in jeopardy as the whole college was evacuated to Weston-Super-Mare.

But it only made Ms Callin more determined and she ended up gaining her teaching qualifications under constant threat of bombing with makeshift lectures regularly going on late into the evening.

She said: “I still remember the air raid bunkers under the tennis courts and there were very few men around as they’d all been called up. But we were a close knit bunch and the war brought about an amazing feeling of camaraderie.”

Despite the hardships of studying in makeshift accommodation she qualified and landed her first teaching post back in Yorkshire straight after the war.

Jean Callin went on to be become a senior lecturer at Sheffield City College and majored in music.

She also devoted much of her later life to voluntary work and working with the handicapped, where she was much loved.

Jean Callin is now the proud holder of an Honorary Bachelor of Education Degree from the University of Roehampton in recognition to her service to education.