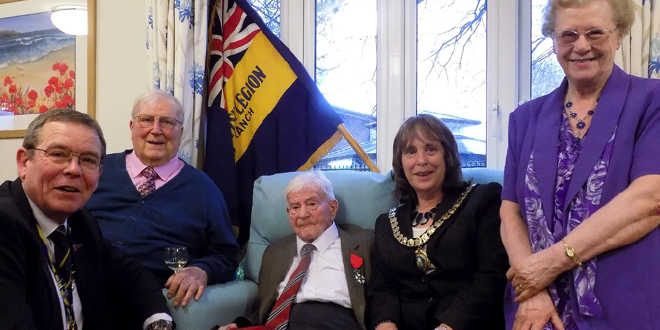 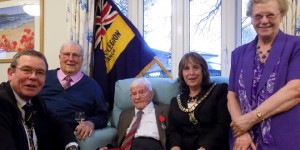 First established by Napoleon Bonaparte in 1802, the Legion of Honour is an award for excellent military conduct presented by the French Government. Bill Howard, formerly of the Royal Army Service Corps attached to the 6th Airborne, received the honour in recognition of his service in France and Greece during the Second World War. He is rewarded for his actions of landing on Gold Beach in Normandy and delivering essential medical and general supplies to field hospitals.

The home welcomed the Mayor of Ferndown, Councillor Mrs Julie Robinson and Chairman of The Royal British Legion, Ferndown Branch, Grant Parrott for the presentation.

The Mayor of Ferndown presented Bill with the award, after which family, visitors and fellow residents enjoyed a buffet lunch together – prepared and served especially by the home’s own kitchen team. The award was also celebrated by the cutting of a wonderful cake provided by Bill’s family.

Commenting on the day, Bill’s brother Roy, said: “I’m very pleased that Bill, along with many others are being recognised. He’s taking the honour in his stride, he is proud that he did his bit, but like many others he seldom speaks about his experiences, but he is delighted. I looked up to Bill and my other brothers as heroes, I’m so proud that he’s been recognised.”

Chairman of The Royal British Legion, Ferndown Branch, Grant Parrott, commented: “It must have been a very frightening experience for all involved. The Battle of Normandy went on for three months after D-Day and Bill would have certainly been right in the middle of it. It’s a tremendous honour to be celebrating this award with Bill and his family.”

Neil Dominy, Home Manager of Care South’s Fairlawn, said: “We are delighted that Bill has been recognised for his bravery and the part he played in the Second World War. I’m very grateful to the staff at Fairlawn, the Mayor of Ferndown, Grant Parrott and to all our guests for taking the time to make this day as special as possible for Bill, his family and everyone at Fairlawn.”